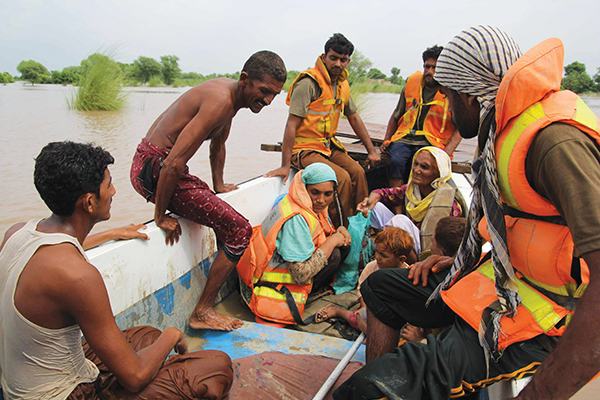 For the fourth year running, floods caused by monsoon rains in Pakistan have left large parts of the country underwater as the government scrambles to minimize losses. According to statistics available from the National Disaster Management Authority at press time, 96 people have died and over 360,000 acres of land, large swathes of it agricultural, is inundated. Holding global warming responsible, NDMA chief Brig. Mirza Kamran Zia told journalists that parts of central Punjab province are at greatest threat as runoff from the northern areas accumulates in the country’s heartland. “Unexpected rains are a global climactic-change phenomena, but we can prepare and plan ahead to mitigate the disaster,” he said. The higher-than-average rainfall also left the country’s financial hub reeling. Lacking proper drainage facilities—an annual problem—Karachi’s low-lying areas were worst-hit this year, as entire neighborhoods vanished underwater and over 20 people died within three days. Accepting global warming as a problem is a start. But unless the PMLN-led government is able to learn from the mistakes of its predecessor, it is unlikely that recognizing the problem will help alleviate it.