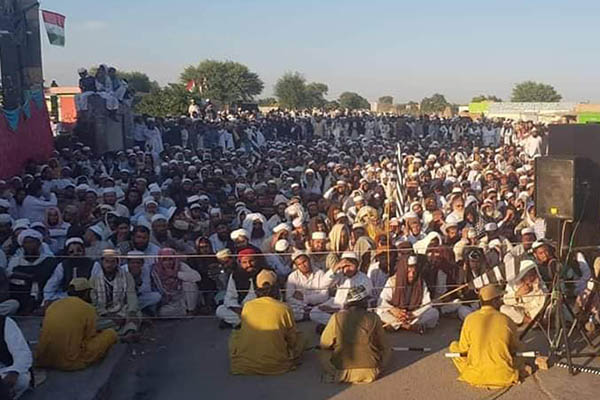 JUIF leaders claim P.M. Khan and his government will step down before they have to resort to a ‘Plan C’

Highways and major traffic arteries across Pakistan remained blocked by Jamiat Ulema-e-Islam (JUIF) protesters on Sunday, as the party vowed to continue its ‘Plan B’ until Prime Minister Imran Khan resigns.

Among the major roads that remain blocked by thousands of protesters are the Quetta-Chaman Highway, which has reduced the number of vehicles traveling to Afghanistan, and the Indus Highway Link Road in Bannu, which has slowed down traffic in the region.

The ‘Plan B,’ which was launched after the JUIF wrapped up its Azadi March sit-in in Islamabad, entered its fifth day on Monday. Provincial governments have deployed police and Rangers to ensure security, though the protesters are thus far maintaining peaceful demonstrations unlike similar protests of the past.

In Karachi, the Hub River Road connecting the Sindh capital to Balochistan remains blocked. There are similar, smaller blockades across Pakistan, including on the Grand Trunk Road, which remains vital to connecting trade routes nationwide.

In Khairpur, Sindh, JUIF leader Rashid Soomro hailed the ongoing protest movement as a success and assured the gathered supporters that the Pakistan Tehreek-e-Insaf-led government would soon have to step down. “We have many plans,” he said. “There is even a Plan Z! But the government will go before we even reach Plan C,” he added, according to local daily Express Tribune.

The Azadi March protests, led by JUIF leader Maulana Fazlur Rehman, are calling for the government to step down and have demanded fresh elections. Launched in Karachi on Oct. 27, they culminated in a two-week dharna in the federal capital before being expanded to cover the entire country through smaller sit-ins designed to block main highways. The PTI-led government had maintained it is willing to negotiate the demands, but will not discuss the matter of P.M. Khan’s resignation, leaving the sides in a persistent deadlock.