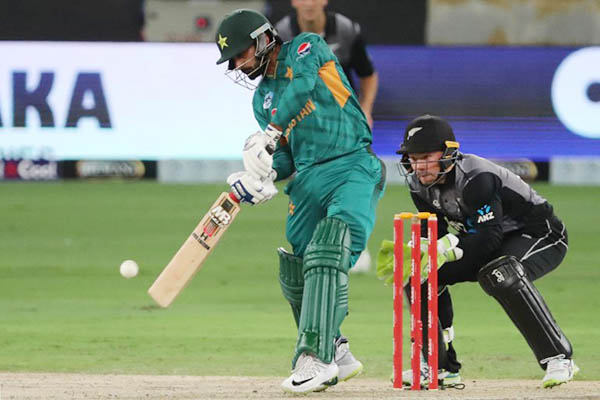 Babar Azam became the quickest batsman to reach 1,000 Twenty20 runs as Pakistan whitewashed New Zealand 3-0 with a comfortable 47-run win in the third and final match in Dubai on Sunday.

The 24-year-old—ranked number one in Twenty20s—hit a punishing 58-ball 79 with seven boundaries and two sixes while Mohammad Hafeez hit a 34-ball 53 not out with two sixes and four boundaries to lift Pakistan to 166-3 at Dubai stadium.

Pakistan spinners Shadab Khan (3-30) and Imad Wasim (2-28) then hastened New Zealand’s demise to 119 all out in 16.5 overs as the Kiwis lost their last eight wickets for just 23 runs. This also becomes Pakistan’s second series whitewash after romping past Australia 3-0 last Sunday.

Kane Williamson top-scored for New Zealand with a 38-ball 60, with eight boundaries and two sixes, while opener Glenn Phillips made 26.

Azam, when on 48, completed 1,000 runs in Twenty20 internationals in just 26 innings, bettering India’s Virat Kohli’s record of reaching the mark in 27 innings.

Azam’s rise has matched Pakistan’s elevation to the world number one ranking in Twenty20 internationals since making his debut against England at Old Trafford in 2016, when Sarfraz Ahmed took charge as captain. Since then Pakistan have won 29 of their 33 Twenty20 internationals with only four defeats, taking their tally this year to 17 wins in 19 matches with two defeats.

Sunday also represented Pakistan’s ninth T20 win in succession since losing to Australia at Harare in July this year.

Williamson and Phillips added 83 for the third wicket after New Zealand lost big-hitting Colin Munro for two and Colin de Grandhomme for six. But once both were dismissed in the same Shadab over, the innings fell apart, with only Ish Sodhi reaching double figures with 11.

Ross Taylor (seven), Mark Chapman (two) and Tim Seifert (nought) also fell in quick succession with debutant birthday boy Waqas Maqsood also chipping in with 2-21. “Another brilliant team effort from us. We needed 160-plus, and our batsmen did it,” said Pakistan skipper Sarfraz Ahmed. “Throughout the series we’ve taken wickets with the new ball, and we’ve done well with the bat too and created so many records.”

Shadab also became the highest wicket-taker in Twenty20 cricket this year with 28 in 19 games.

New Zealand skipper Williamson rued his team’s spectacular collapse after being well set on the run-chase. “At the halfway stage, on that surface, that was a very good total from Pakistan but we lost our way after being well set,” said Williamson. “It’s a tough pill to swallow, but we’ve got to put that behind us and look ahead to the one-day series.”

The two teams start a three-match one-day series with the first match in Abu Dhabi on Wednesday.

Earlier, Azam and Hafeez set the tone for Pakistan’s big total after they won the toss, adding 94 runs for the second wicket after Fakhar Zaman fell for 11. Hafeez smashed two sixes off leg-spinner Sodhi’s 11th over of the innings while Azam smacked two sixes off Munro to complete 100 runs in the 15th over.

Azam registered his eighth fifty in Twenty20 cricket while Hafeez’s half century was his tenth in the shortest format. Shoaib Malik made a nine-ball 19 with three boundaries.

Pakistan won the first match by two runs in Abu Dhabi and the second by six wickets in Dubai.