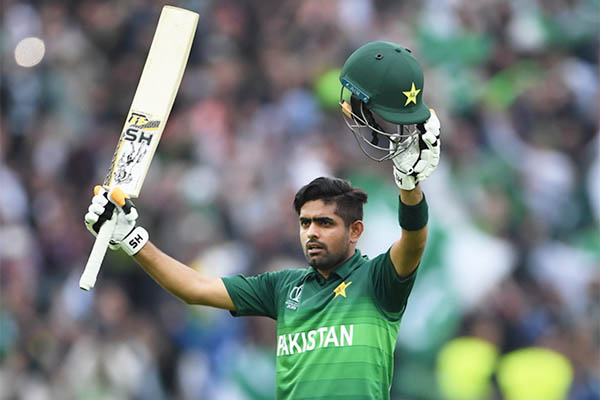 Babar Azam hit a sparkling century as Pakistan kept alive their hopes of reaching the World Cup semi-finals with an impressive six-wicket win against New Zealand on Wednesday.

Sarfraz Ahmed’s side appeared down and out with only one win in their first five matches but they have bounced back strongly to beat South Africa and now previously unbeaten New Zealand. Their victory at Edgbaston means they are level on seven points with Bangladesh and just one point behind faltering hosts England, with matches against bottom side Afghanistan and Bangladesh to come.

Man-of-the-match Babar was the star of the show, scoring a measured 101 off 127 balls in front thousands of fanatical fans in Birmingham as Pakistan surpassed New Zealand’s total of 237 for six in the final over.

Pakistan’s revival after three defeats earlier in the tournament recalls memories of the 1992 campaign, when they won the trophy after a sticky start. “Whenever we are in a corner we play our best, it was a great team effort,” said winning captain Sarfraz. “All the bowlers bowled well and there was some of the finest batting I have ever seen. The target of 240 was not an easy and we just wanted to play the 50 overs. Babar played one of the best innings I have ever seen. They handled the pressure so well. We are not thinking about 1992, we are going match by match.”

Pakistan were wobbling at 110-3 when Mohammad Hafeez was out for 32 in the 25th over but 24-year-old Babar anchored the innings and was ably supported by Haris Sohail, who hit 68. During the course of his knock, Babar became the second-fastest to reach 3,000 one-day-international runs—in 68 innings.

Babar took 11 innings more than South Africa’s Hashim Amla but overtook West Indies great Viv Richards (69 innings). “The wicket was difficult but my aim was to bat for 50 overs and if I did I knew Pakistan would win the match,” said man-of-the-match Babar. “We know we’d need to score runs off the pace bowlers. Once [Mitchell] Santner came on it was doing stuff off the pitch so Hafeez told me to stick at it and score three or four runs an over.”

Sohail was run out in the 49th over, leaving Sarfraz to hit the winning runs.

Earlier, Jimmy Neesham hit a career-best 97 not out while Colin de Grandhomme made 64 after New Zealand won the toss and chose to bat.

Left-arm seamer Shaheen Shah Afridi (3-28) starred with the ball as Pakistan reduced New Zealand to 83-5, with in-form captain Kane Williamson dismissed by leg-spinner Shadab Khan for 41. “The fight we showed in the back end was outstanding and we were in a competitive position,” said Williamson. “We were right in it but their batsmen played beautifully well and took the game away from us. There are so many games in the round robin you can’t win them all.”

New Zealand are second in the 10-team table on 11 points behind Australia (12 points), the only team who have qualified so far. The top four teams qualify for the semi-finals.