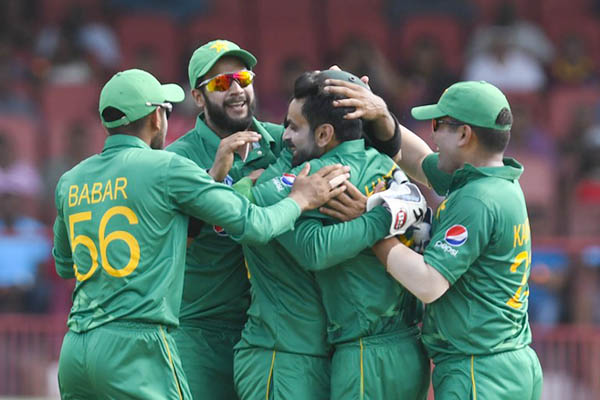 Tourists won their second of three matches by 74 runs.

Babar Azam stroked yet another hundred against the West Indies and Hasan Ali claimed five wickets as Pakistan won the second one-day international by 74 runs at the National Stadium in Guyana on Sunday.

Put in by West Indies captain Jason Holder, Pakistan totaled 282 for five and then dismissed the hosts for 208 off 44.5 overs despite a battling knock from Holder, who was last out to Ali for a top score of 68.

Reinstated in his favorite number three spot in the batting order, Azam held a faltering innings together and then accelerated toward an unbeaten 125, his fifth century in ODIs and fourth in five innings against the Caribbean side. His classy knock occupied 132 deliveries and was embellished with three sixes and seven fours.

“I just wanted to bat through to the end of the innings and I was able to achieve that to help us put up a good total,” he said. “It doesn’t matter where I bat, I just want to make a contribution for the team.”

Azam received critical support from Imad Wasim, the all-rounder finishing unbeaten on 43 in an unbroken sixth-wicket stand of 99 which released the shackles of previously disciplined West Indian bowling on a pitch lacking the pace and bounce from the first match—which the home team won by four wickets—two days earlier.

On a good batting pitch the home side also lost their discipline in the reply, crashing to 75 for six with a series of poor shots while the Pakistan bowlers showed much greater intent than in the first game. “Our batting at the top again let us down because I felt, on this pitch, we definitely had a chance to get to 283,” Holder noted at the end of the match. “Maybe it would have been different with some more runs at the top but now we have to focus on winning on Tuesday [in the third and final match].”

Holder was given support by Ashley Nurse, who belted a one-day best 44 in dominating a 58-run seventh-wicket stand with his captain. However the accurate Ali, who finished with five for 38 off 8.5 overs, eliminated any outside chance the West Indies had of stealing a series-clinching victory. He trapped Nurse leg-before and then claimed the last two wickets in the 45th over, both to catches by Azam at mid-off. Holder’s 68 was also his best in this format of the game.

Following the stirring four-wicket win on Friday in which they successfully chased a target in excess of 300 in an ODI for the first time, the home side bowled with purpose and discipline through most of the innings but faded badly under the assault of Azam and Wasim at the end, conceding 84 runs off seven overs.

Pakistan found free scoring difficult at the start of the innings and lost both openers to excellent leg-side catches by wicketkeeper Shai Hope off fast bowlers Shannon Gabriel and Alzarri Joseph. Azam then found a capable partner in Mohammad Hafeez, the pair putting on 69 for the third wicket before Hope was called into action again to effect a leg-side stumping off Nurse as the veteran batsman advanced down the pitch to the off-spinner.

Hope’s competence behind the stumps was again in evidence when he snared a chance offered by Shoaib Malik off leg-spinner Devendra Bishoo, and when captain Sarfraz Ahmed fell to a catch at mid-on for a run-a-ball 26 off Gabriel to make the score 183 for five in the 39th over, it looked as if the tourists would struggle to post a challenging total. Both teams meet in the decider on Tuesday at the same venue with the West Indies seeking their first ODI series win over Pakistan for 26 years.