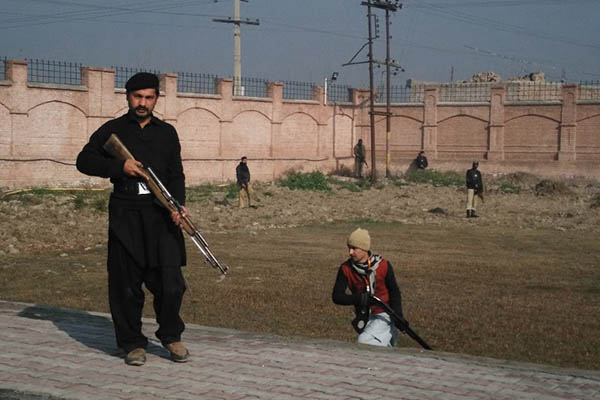 At least 21 killed, 60 others injured in Taliban-claimed assault.

Taliban gunmen attacked a university in northwest Pakistan on Wednesday morning, killing 21 people and injuring at least 60 others during a two-hour rampage, according to police.

Shaukat Yousafzai, a minister in the Khyber-Pakhtunkhwa provincial government, had earlier told media the death toll had risen to 20. “I fear the casualties will rise,” he added. Police said the clean-up operation had been completed after security forces killed four militants, adding that 21 people had been killed. Regional police chief Saeed Wazir told AFP most of the student victims were shot dead at a hostel for boys on the university campus.

The Tehreek-e-Taliban Pakistan have claimed responsibility for the attack in a statement issued to local media, claiming they deployed four suicide attackers for the assault. It is presently unclear if the four identified militants were the only ones participating in the attack or were part of a larger force.

In a post on Twitter, Army spokesman Lt. Gen. Asim Bajwa confirmed no more gunshots could be heard after earlier saying the militants had been restricted to two blocks of the university and troops and commandos were participating in the operation. He said four attackers had been killed by security forces and all buildings and rooftops had been secured.

“Police told me that firing is continuing on the campus,” Fazal Raheem Marwat, vice chancellor at the Bacha Khan University in Charsadda, told AFP earlier. “Gunmen have entered the university campus from the southern side,” he said. A professor of the Chemistry Department succumbed to his injuries after being rescued, rescue officer Mujahid Khan told Newsweek. District Hospital officials, meanwhile confirmed they had already received 50 injured.

“There are male and female staff members and students on the campus,” said the vice chancellor, adding he had been on his way to work when he was informed of the attack. “There was no announced threat but we had already beefed up security at the university.”

Television images showed female students clutching hands as they fled the university, with traffic blocked on the roads of Charsadda as security forces rushed towards the campus. Hundreds of parents are lined up outside the university hoping for news of their children. There were scenes of panic as several parents were unable to reach anyone due to cellphones being off or otherwise inaccessible.

Sohail Khalid, senior police official in Charsadda, told Newsweek there was a poetry recital underway today, and around 600 additional guests were present in the school for the event.

In a statement issued to media, P.M. Nawaz Sharif said he was monitoring the ongoing operation and the measures being taken to overcome the extremists. “We are determined and resolved in our commitment to wipe out the menace of terrorism from our homeland,” he said. “The countless sacrifices made by our countrymen will not go in vain.”

Peshawar was the location of Pakistan’s deadliest extremist attack, when Taliban gunmen stormed an Army-run school in December last year and slaughtered more than 150 people, most of them children, in an hours-long siege. The attack on the school prompted a crackdown on extremism in Pakistan, with the military increasing an offensive against militants in the tribal areas where they had previously operated with impunity.