Home News Galleries Back On Script 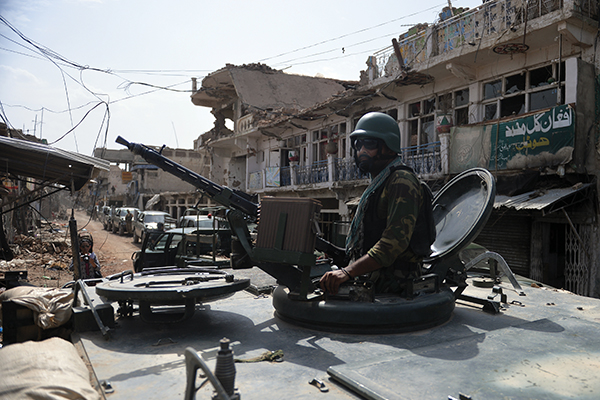 The military’s ISPR is back on script. After a series of statements on the political crisis in Islamabad, it issued an update, on Sept. 3, about the terrorism crisis. Operation Zarb-e-Azb, it said, is “progressing as per plan.” The tally: 910 terrorists killed; 82 soldiers killed (42 of them in North Waziristan, 23 in the other six tribal agencies) and 269 injured; 27 IED factories, one rocket factory, and one ammunition factory destroyed; additionally, 2,274 “intelligence-led coordinated counterterrorism operations across the country” to prevent terrorist blowback have netted 114 terrorists and killed 42. The Army has also provided 19,376 tons of food rations to 97,570 displaced families at six delivery points; treated 113,209 people and 32,226 cattle; and vaccinated 73,338 cattle and 129,141 poultry. The Pakistani Taliban’s newest offshoot, Jamaat ul Ahrar, says this is “nothing but complete lies,” and that only “25 to 30” of their comrades and about five dozen civilians have been killed. The militants also say that bomb factories and training centers were relocated prior to the start of the operation.