Home Lightbox Back to Normal? 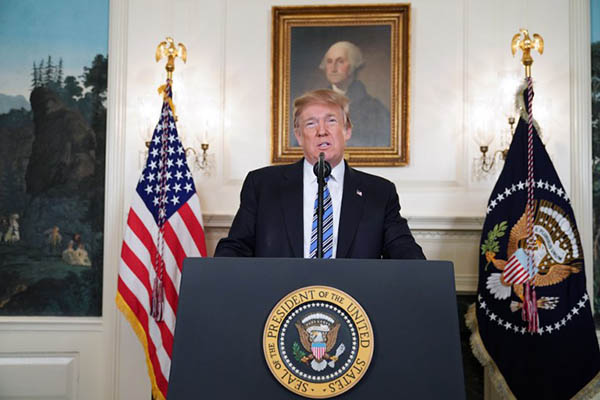 Pak-U.S. relations seem to be sliding back to normal after a dip caused by President Trump’s crazy tweets. Now Washington says it doesn’t want “to sever bilateral ties with this important ally.” Pakistan, after showing unrealistic defiance, says it “wholehearted supports the U.S.-backed Afghan offer of peace talks with the Taliban.” It is moot whether the style of “tweet” diplomacy adopted by the U.S. president will profit America, but Pakistan has been hurt by the FATF vote to reconsider its own aggressive posture. Since the rethinking is bilateral no one will fear coming off as chicken to their publics.

President Trump has played a non-linear hard-to-decipher game in the Middle East and has upset the sectarian balance of the Gulf by suspending “normalization” with Iran. China is already heavily in Iran, but India too has moved in with big money. The latest news is that the vacuum has attracted Russia as well. Moscow has already triumphed in Syria because Trump is unwilling to even acknowledge the old American footprint in the region. Pakistan was already making noises about getting cozy with Russia and now the first bilateral overtures have been made. Things don’t look good in Afghanistan however and President Trump’s “forward” policy toward Pakistan may seem too impulsive to his aides.

Earlier, Pakistan put on defiance with an ear cocked to the Army, which has not been too fond of America even in the heyday of Pak-U.S. relations. This time around, in the face of the Trumpian hype, the Army has been a low-key commentator, barring a dozen retired military hawks running at the mouth on TV. Pakistan must rely on the flexible response—another name for wisdom—in the style of China, which keeps its cool even after becoming a great world power. Pakistan needs to sort out its internal economically crippling political mayhem and make efforts to break out of regional isolation it has contracted as a price for its neglect of its relations with India.