Home Latest News Back to School 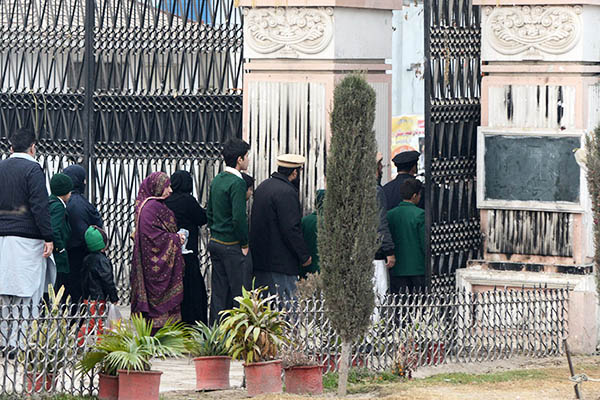 Children across Pakistan, including students of Peshawar’s Army Public School, return to studies amid tight security.

Child survivors of Pakistan’s worst ever terrorist attack returned to the school where Taliban militants massacred their classmates last month, with both the students and their parents expressing a mixture of defiance and apprehension.

The Dec. 16 attack on the Army Public School in Peshawar by a group of gunmen and suicide bombers claimed the lives of 150 people, mostly children, and prompted a bout of national soul-searching in a country used to high levels of militancy. Across the country, schools had remained shut for an extended winter break as authorities beefed up security measures. Some private schools, especially in Khyber-Pakhtunkhwa province, remain closed as they beef up their security measures. The provincial government has announced that no school will be allowed to reopen until the Home Department has issued them with a ‘no objection certificate’ regarding their security detail.

For 16-year-old Shahrukh Khan, who was shot in both legs while pretending to play dead in his school’s auditorium, going back was traumatic. “I have lost 30 of my friends, how I will sit in the empty class, how I will look to their empty benches,” he said before the school reopened. “My heart has been broken. All the class fellows I had, have died, now my heart does not want to attend school,” he added.

At least 20 soldiers were seen at the main entry point of the Army Public School, with an airport-style security gate installed at the front. Elevated boundary walls with steel wire fencing have been put in place in some schools nationwide as staff rang bells to signal the start of the day.

Raheel Sharif, the head of Pakistan’s Army, made an unannounced visit with his wife, greeting students with handshakes and hugs. According to military officials, students were allowed to return home after an assembly led by the Army chief in light of the emotional circumstances. They said students from sixth- to 10th-grade, as well as parents of both the injured and the deceased, attended the assembly today. School administrators told Newsweek classes would officially commence from tomorrow.

Parents spoke of having to sit down with their children and mentally prepare them for their return to the school, which has undergone a complete renovation to remove all traces of the bloody attack. “He was terrified but we talked him up, we can not keep him imprisoned between four walls and we must stand against militancy,” said Muhammad Zahoor, as he walked his son along the main Warsak Road. “I want to go to school to see my friends, I will join the Army after my schooling and will take revenge,” said Muhammad Zaid, his son.

The school administration is also taking pains to cater to students’ desire to avoid particularly traumatic areas, such as the school auditorium where the majority of deceased students were gunned down. “It would be hard for students to return to the old auditorium,” acting principal Tariq Durrani, previously a Pakistan Studies teacher, told Newsweek. He said the old auditorium had been sealed indefinitely. “It has too many bad memories attached to it. So, we have decided to build a new one by utilizing the parking area.”

Due to the shortage of teachers, the school administration has also combined several grades and reduced the sizes of the classes so students would not have to face the empty seats where their class fellows used to sit.

Durrani said the military would be ensuring the school’s security. “An entire unit of the Army will be permanently deputed at the school,” added Durrani, who escaped the Dec.16 attack unhurt.

Of the 150 victims killed in Pakistan’s deadliest-ever attack, 134 were children. Survivors recounted Taliban gunmen moving from room to room hunting for students and teachers, sometimes toying with them and pretending they would let them go, before lining them up and executing them in front of their peers.

Like Muhammad Zaid, many struck a defiant note. “I am not scared, no force can stop me from going to attend my school, I will go and will tell the attackers, ‘we are not afraid of you’,” said 16-year-old Zahid Ayub, who sustained minor wounds.

“A memorial plaque for the slain students is being built at the entrance of the school. It will have the names of all those martyred,” said Mohammad Farman, a computer lab assistant. This will be in addition to a dedicated notice board, where parents have pinned up pictures of children who were slain by the Taliban gunmen.

Pakistan has strengthened its offensive against the Taliban since the Peshawar attack, ending its six-year-old moratorium on the death penalty in terror cases last month in the wake of the massacre. Last week the government announced it was setting up nine military courts to hear terrorism-related cases, prompting concern from rights groups who believe the Army will use the crisis to wrest more powers from the civilian government.

The country’s liberals, meanwhile, have held protests to pressure the government into arresting clerics who praise the Taliban, as well as crack down on sectarian and anti-India militant groups who operate with relative impunity. Analysts warn that Pakistan must end its dualist policy that permits ‘good’ militants while taking action against ‘bad’ militants if gains against extremism are to be made sustainable.