Home Latest News Back to Square One

Back to Square One 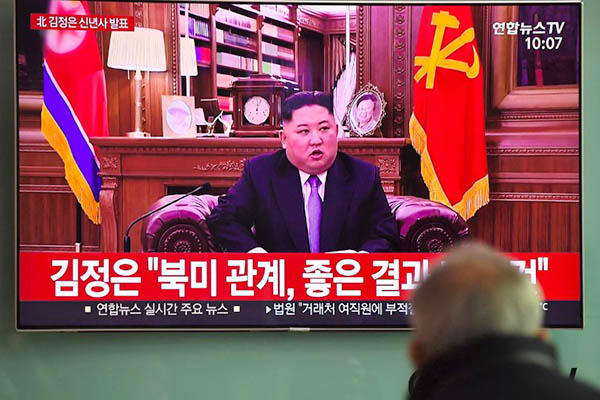 Nuclear-armed North Korea wants good relations with the U.S. but could consider a change of approach if Washington maintains its sanctions, leader Kim Jong-Un warned in his New Year speech on Tuesday after 12 months of diplomatic rapprochement.

At a summit with U.S. President Donald Trump in Singapore in June the two signed a vaguely worded pledge on denuclearization of the Korean peninsula. But progress has since stalled with Pyongyang and Washington arguing over what that means. “If the United States does not keep the promise it made in the eyes of the world… and persists in imposing sanctions and pressure against our Republic,” Kim said on Tuesday, “we may be compelled to find a new way for defending the sovereignty of the country and the supreme interests of the state.” He was willing to meet Trump again at any time, he added, and would seek “to obtain without fail results which can be welcomed by the international community.”

The North is demanding sanctions relief—it is subject to multiple measures over its banned nuclear weapons and ballistic missile programs—and has condemned U.S. insistence on its nuclear disarmament as “gangster-like.”

Washington is pushing to maintain the measures against the North until its “final, fully verified denuclearization.”

Kim’s speech “expressed his frustration with the lack of progress in negotiations so far,” said former South Korean vice unification minister Kim Hyung-seok. The North Korean leader “obviously had certain expectations that the U.S. would take certain steps—however rudimentary they are—after the North blew up a nuclear test site and took other steps. But none of them materialized. He is faced with this urgent task to improve his ‘socialist economy’—which is impossible to achieve without lifting of the sanctions.”

In marked contrast with Jan. 1, 2018, when he ordered mass production of nuclear warheads and ballistic missiles, Kim said the North had “declared at home and abroad that we would neither make and test nuclear weapons any longer nor use and proliferate them,” calling for the U.S. to take “corresponding practical actions.”

The production pledge was a “significant evolution in leadership intent, if true,” Ankit Panda of the Federation of American Scientists said on Twitter, but credibility was an issue. “All this might offer is a temporary cap on warhead production as long as talks are on with the U.S.—to be withdrawn when sanctions relief doesn’t arrive,” he added.

Kim spoke sitting in a dark leather armchair, in a large office lined with packed bookshelves and paintings of his predecessors, father Kim Jong-Il and grandfather Kim Il-Sung. As he began speaking—in a deep, gravelly voice and wearing a dark suit and blue tie—a clock behind him read at moments after 12. But at times during the address it was blurred out and towards the end of the half-hour broadcast it was close to 1, suggesting the speech was recorded in several takes.

The leader’s New Year speech is a key moment in the North Korean political calendar, reviewing the past and setting out goals for the future.

The 2018 address was a crucial catalyst for the developments that followed. It came after a year of high tensions when the North made rapid progress with its weapons development, carrying out its sixth nuclear test—by far its most powerful to date—and launching rockets capable of reaching the entire U.S. mainland.

The two leaders had traded personal insults—Trump mocked Kim as “Little Rocket Man,” who in turn called him a “mentally deranged U.S. dotard”—and threats of war as fears of conflict rose.

In last year’s speech Kim warned “the nuclear button is on my office desk all the time,” but also offered to send a team to the forthcoming Winter Olympics in the South. That opened the way for the South’s dovish President Moon Jae-in to play the role of peace broker.

Seoul and Washington are in a security alliance and the U.S. stations 28,500 troops in the South to protect it against its neighbor. A rapid sequence of developments followed, with athletes and a senior delegation led by Kim’s powerful sister going to the Pyeongchang Games in February, before Kim met Chinese President Xi Jinping in Beijing ahead of the Singapore summit with Trump.

Kim also met Moon three times in 2018—twice at the border truce village of Panmunjom and once in the North’s capital—and at the weekend vowed to meet Moon “frequently” this year.

South Korea on Tuesday reacted positively to Kim’s speech, which came after Seoul and Pyongyang have pursued several reconciliation initiatives in recent months. These include projects to upgrade the North’s outdated rail infrastructure and reconnect it with the South. “We welcome Kim’s reaffirmation… for complete denuclearization and permanent peace of the Korean peninsula as well as the improvement in North-South ties,” Seoul’s unification ministry said in a statement.

Much of Kim’s speech on Tuesday focused on North Korea’s moribund economy, saying that improving people’s lives was his top priority and tackling energy shortages was an urgent task.