Home Culture ‘Back Up, You Creep’

‘Back Up, You Creep’ 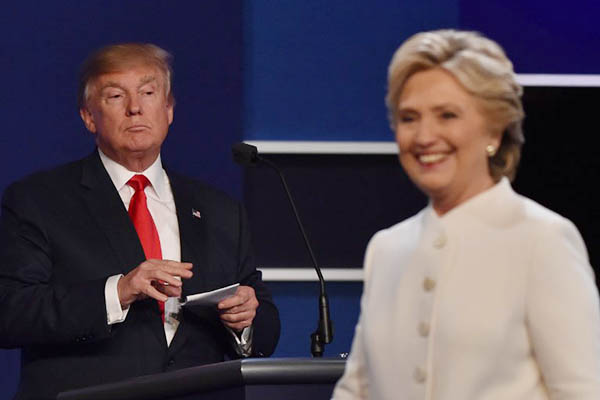 Hillary Clinton lashes out at Donald Trump in new memoir

Hillary Clinton calls Donald Trump a “creep” in her new memoir and describes how the now-president’s behavior during one of their debates made her skin crawl, according to excerpts released on Wednesday.

“We were on a small stage and no matter where I walked, he followed me closely, staring at me, making faces. It was incredibly uncomfortable,” Clinton, who made history last year as the first woman presidential nominee of a major U.S. party, wrote in her upcoming book, titled What Happened. “He was literally breathing down my neck. My skin crawled,” she added, noting that the October 2016 debate at Washington University in St. Louis came just days after the release of a shock audiotape in which Trump was heard bragging about groping women.

“What would you do? Do you stay calm, keep smiling and carry on as if he weren’t repeatedly invading your space? Or do you turn, look him in the eye and say loudly and clearly: ‘Back up, you creep, get away from me,’” Clinton steamed. “‘I know you love to intimidate women, but you can’t intimidate me.’”

The excerpts were obtained by MSNBC, which broadcast portions of the audio version—in Clinton’s own voice—of the highly-anticipated memoir in which the former first lady dissects her doomed presidential campaign. The book is set for a Sept. 12 release in the United States. On Wednesday, advance sales pushed it to number one on Amazon’s list of bestsellers.

Clinton has said that after months of reflection on her defeat, she spent much of this year writing a book that aims to pull back the curtain on the strategies—and failures—in one of the most astonishing elections in U.S. history.

In the excerpts she also describes her feelings of having let down the American people. “Writing this wasn’t easy. Every day that I was a candidate for president, I knew that millions of people were counting on me and I couldn’t bear the idea of letting them down. But I did,” she wrote. “I couldn’t get the job done. And I’ll have to live with that for the rest of my life.”

Publisher Simon and Schuster said last month that the former secretary of state’s tome would be her “most personal memoir yet.” The publishing house said the book would reveal what Clinton felt during the bruising 2016 campaign, and her thoughts on the mistakes she made. “I don’t have all the answers,” she said in the excerpts. “I write about moments from the campaign that I wish I could go back and do over. If the Russians could hack my subconscious, they’d find a long list,” she said, taking a jab at Moscow, which U.S. intelligence agencies have concluded sought to influence the U.S. election in Trump’s favor.

Clinton has pointed the finger at Russia’s “disinformation” effort and cyber-hacking against her campaign as one of the reasons for her stunning defeat.

In May, she said the hack and release of private emails from her campaign chief John Podesta, and the FBI briefly re-opening an investigation into her own emails just 10 days before the election, helped tip the scales to her rival. As for Trump controversially standing behind her during their second debate, Clinton said in the book excerpts that while she “kept my cool” despite the Republican candidate’s lurking, she strongly considered spinning around and telling Trump to back off. “It certainly would have been better TV,” she wrote.