‘Back With Eyes Open’ 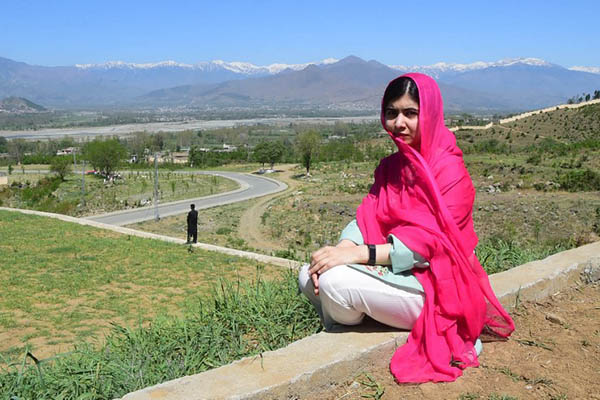 Malala Yousafzai visited the Swat valley on Saturday for her first trip back to the once militant-infested Pakistani region where the Taliban shot her in the head more than five years ago.

“I left Swat with my eyes closed and now I am back with my eyes open,” she told AFP, referring to how she was airlifted out in a coma after the attack in 2012. “I am extremely delighted. My dream has come true. Peace has returned to Swat because of the invaluable sacrifices rendered by my brothers and sisters,” she said at a school outside Mingora, the district’s main town, where she was escorted by the Pakistani military.

The brief trip by the 20-year-old Nobel laureate is a highly symbolic moment for Pakistan, which regularly touts Swat as a success story in its long battle with extremism as it defends itself against accusations by the U.S. and others that its northwest remains a safe haven for militancy. The visit—on which she was accompanied by her father, mother, and two brothers—was kept tightly under wraps.

She took pictures of Swat valley from an army helicopter and tweeted them saying: “The most beautiful place on earth to me.”

After flying from Islamabad, she met with friends and family before visiting the all-boys Swat Cadet College Guli Bagh, a military-run school some 15 kilometers outside Mingora. “So much joy seeing my family home, visiting friends and putting my feet on this soil again,” she tweeted.

There she lingered some 45 minutes, taking photographs, before traveling back to Islamabad. The entire visit is believed to have lasted just over two hours.

Mingora is where Malala’s family was living and where she was attending school on Oct. 9, 2012, when a gunman boarded her school bus, asked “Who is Malala?” and shot her. She was treated first at an army hospital then airlifted to the British city of Birmingham.

Her near-miraculous recovery, and tireless career as an education advocate, have since turned her into a global symbol for human rights, and in 2014 she became the youngest person ever to be awarded the Nobel Peace Prize when she was just 17. Her family also told AFP of their joy in coming home.

“I am unable to believe I am back in Swat and meeting my own people,” her father Ziauddin Yousafzai said, in comments echoed by her mother Toor Pekai.

The trip comes two days after Malala, currently a student at Oxford University in Britain, made her emotional return to Pakistan, where her surprise visit has been met with widespread joy and pride. She broke down in tears as she made a televised speech on Thursday, saying it was her “dream” to be back, and has vowed to Pakistani media that she will return permanently after she has completed her education.

However she has also been met with pockets of intense criticism. Malala is widely respected internationally, but opinion is divided in Pakistan, where some conservatives view her as a Western agent on a mission to shame her country. There had been much speculation within the country over whether Malala would go to Swat during her visit.

The mountainous region, once a prized tourist destination famed for its pristine scenery, was overrun by the Pakistani Taliban in 2007. The militants imposed a brutal, bloody rule, but the army drove them out in 2009. Recently restrictions on tourists visiting the area were lifted.

However security has remained fragile, as the assault on Malala three years after the military operation demonstrated. In February this year 11 military personnel were killed in an attack, and analysts have warned the militants still have a presence there.

Residents of the area have praised Malala to AFP in recent days, crediting her with helping to generate improvements in education—especially for girls—in the deeply conservative region, part of Khyber-Pakhtunkhwa province.

Earlier this month an all-girls school built with money from the Malala Fund opened in Shangla district northeast of Mingora, where her family lived before moving to the city.

Malala told AFP in Swat that she could see vast changes in the area since 2012—but added she has read reports which claim up to 50 percent of children are still out of school. “We will have to work very hard to bring them all to school,” she vowed.

Residents of Swat also welcomed her visit and urged fellow Pakistanis to support her efforts to promote girls’ education. “We welcome Malala and the slogan that she has raised—one pen, one teacher. We have pinned our hopes in Malala,” Nazir Khan, a government servant, told AFP. “People have positive as well as negative views about her,” fellow resident Arshad Ali said. “We need to see what she has done until now, she has constructed a model school at Shangla reflecting her sincerity of purpose—to promote education especially among girls in the country.”