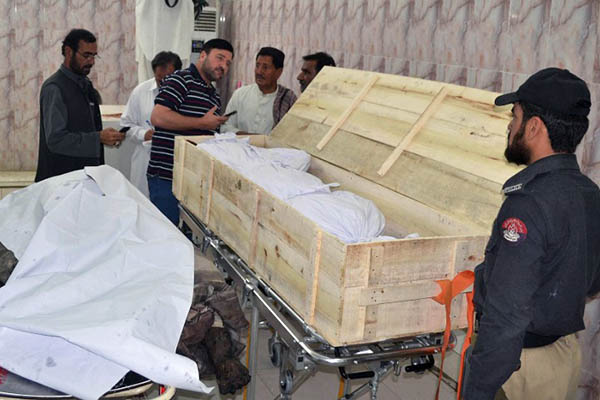 The U.S. drone strike that killed Afghan Taliban chief Mullah Akhtar Mansour while he was traveling through Pakistan’s Balochistan province could cause further instability and prompt militant groups on both sides of the Durand Line to unite forces, warn senior Pakistani analysts and former government officials.

“It appears whatever influence Pakistan believed it had over the Taliban has disappeared,” says Rustam Shah Mohmand, a senior defense analyst. He told Newsweek that Mullah Mansour’s death on Pakistani soil had angered the militants because they believe Islamabad colluded with Washington to target the former chief. “If Pakistan was not apprised of this attack in advance, it needs to clarify that—with evidence—as soon as possible,” he said, adding that otherwise the militants could expand their anti-government operations to Pakistan. “We have been facing the Pakistani Taliban for 10 years, and I fear that if the Afghan Taliban join them in targeting us, we will see catastrophic casualties,” he warned.

Mohmand and several other analysts said Pakistan’s trump card remains the number of Taliban leaders who reside in Balochistan, the so-called Quetta Shura, but cautioned that this would not stop the militants from turning on Rawalpindi.

Last year, addressing the Council on Foreign Relations in Washington, Pakistan’s adviser on foreign affairs Sartaj Aziz admitted for the first time that Islamabad had “influence” over the Taliban because many of them were living with their families in Pakistan. “It was Pakistan who pressured the Afghan Taliban to take part in the first meeting on peace talks with the Afghan Government,” he added.

Following Akhtar Mansour’s killing in Balochistan—and the discovery of a Pakistani passport and ID card in his possession—there has been a growing demand for Islamabad to explain how a noted militant, who is an Afghan national, could secure citizenship documents without the government’s knowledge. Interior Minister Chaudhry Nisar Ali Khan claimed in a press conference last month that corruption in the National Database and Registration Authority had allowed Wali Mohammad née Mansour to ‘purchase’ Pakistani papers. But this still leaves the question of how many other Afghan nationals might possess Pakistani identification.

“There are dozens of Afghan Taliban families living in the Kuchlak and Noshkai areas of Balochistan,” said a senior journalist based in the restive province. “They can easily enter Afghanistan’s Helmand province from this location without having to travel through a border checkpost,” he told Newsweek on condition of anonymity as he fears retribution. “Many journalists are ‘discouraged’ from reporting on these matters by militant groups or Pakistan’s own security agencies,” he added.

Another journalist, also speaking on condition of anonymity, said there was no doubt that the Afghan Taliban had taken root in Balochistan. But he derided a recent statement by Balochistan Home Minister Sarfraz Bugti in which the politician warned Afghan refugees to leave Pakistan after allegedly discovering six spies working for Kabul’s intelligence agency. “All you have to do is ask the law-abiding Afghan refugees and they’ll gladly tell you who’s a militant,” he said. “The militant commanders live in the lap of luxury; the refugees can barely make ends meet,” he added.

Both journalists said local residents claimed the Afghan militants would spend a few days in Balochistan with their families before returning to Afghanistan to wage war. “Our government and security forces need to stop pretending this is not happening,” said one of them. “The Taliban have made it clear our ‘influence’ is not enough to bring them to peace talks. By continuing to give them shelter, we are supporting the ongoing unrest in Afghanistan,” he added.

Sarfraz Khan, a defense analyst, questioned how Pakistan could admit to hosting the Afghan Taliban on one hand while claiming Mullah Mansour had not been living in the country on the other. “We’re not so innocent that we had no idea that the leader of the Taliban would visit Pakistan regularly. This seems unbelievable to the entire world,” he added.

Khan said Islamabad needed to end all ties with the Taliban. “We should ask Afghanistan to certify that they will also prevent any militants from entering Pakistan from their territory [to prevent retaliation],” he said. “This is the only solution to this problem. Otherwise, things will just get worse.”

But while civilian analysts urge for a complete break in ties between Rawalpindi and the Taliban, several former military officials maintain that the patronage is essential for Pakistan’s security. “Losing influence over the Afghan Taliban will ultimately make our northwestern border insecure and we will have to shift our focus from the terrorists [Pakistani Taliban] targeting us,” said Brig. (retd.) Mohammad Siddiq. “Pakistan needs to have good ties with all its neighbors but only if they wish the same for us,” he added.

A senior military officer, who spoke on condition of anonymity because he is not authorized to speak to media, said Pakistan’s primary reason for backing the Taliban was Afghanistan’s ties with India. “Why should we trust Kabul when Afghan checkposts near the Pak-Afghan border regularly hoist both Indian and Afghan flags,” he said. “Why would the military force of one country raise the flag of another and not its own? It’s fine if they want good ties with their neighboring nation, but this implies something more sinister,” he said. “We cannot stop supporting the Taliban as long as they are willing to sit down for peace talks because it helps stability in the region,” he added.

“While favoring terrorists will never be Pakistan’s policy, nor has it ever been, if someone’s family has migrated [to Pakistan] from Afghanistan, they have a right to meet their family,” added retired brigadier Siddiq. “According to my information, Mullah Akhtar was meeting his family in Iran and was traveling through Pakistan to return to Afghanistan,” he added. “There have been reports that Akhtar was tracked from outside of Pakistan. We would never be involved in this as it damages our attempts to broker peace talks,” he said, adding that the first round of peace talks had been damaged only after news of Mullah Omar’s death was leaked to media. “We all know who leaked that news and who benefited from it.”

Despite Rawalpindi’s apparent desire to keep the Taliban onboard, the militants’ actions following Mullah Mansour’s killing suggest this is unlikely. Observers say the Taliban’s choice of Mullah Haibatullah Akhundzada as their new chief reflects their decision to distance themselves from Pakistan. “Sirajuddin Haqqani, a leader of the Pakistan-based Haqqani network and deputy of the Afghan Taliban might have helped Rawalpindi retain some control of the militants,” said Mohmand. “But the Haqqani network has little influence in Afghanistan, the U.S. government already has a bounty on his head and many Taliban don’t consider him a ‘true mujahid’ and would not permit someone from outside the group to lead them,” he added.

According to Mohmand, Akhundzada is primarily a cleric and his leadership is expected to echo that of Mullah Omar. “He will definitely prefer to continue targeting Afghan forces over seeking peace,” he added. Senior journalist Rahimullah Yusufzai said Akhundzada’s appointment was meant to unite the various Taliban factions. “His religious background makes him acceptable to every Taliban commander,” he told Newsweek. “They wanted to avoid a repeat of Mullah Mansour’s election with some militants refusing to accept him as their leader,” he added. Akhundzada is also relatively unknown by the international community and this mystery likely also aided in him being elected, said Yusufzai.

A Taliban commander, speaking on condition of anonymity, told Newsweek the militants no longer trusted Pakistan. “The death of Mullah Mansour has cast doubt in the mind of every Talib. They [Pakistan] have betrayed us.” The militant said, warning of retaliatory attacks to avenge Mansour’s killing. He said new chief Mullah Akhundzada would rely on his two deputies—Sirajuddin Haqqani and Mullah Yakoub—to guide him in the ways of war.

Echoing the concerns of independent observers, a Pakistani Taliban commander of the Khalid Sajna group said Mullah Mansour’s killing had brought the Pakistani and Afghan Taliban factions closer together. “This [U.S. support of Pakistan] proves our war on Pakistan’s government is valid and correct in light of shariah,” he added. “Our combined efforts will prove just how ineffective Pakistan’s military operations are.”