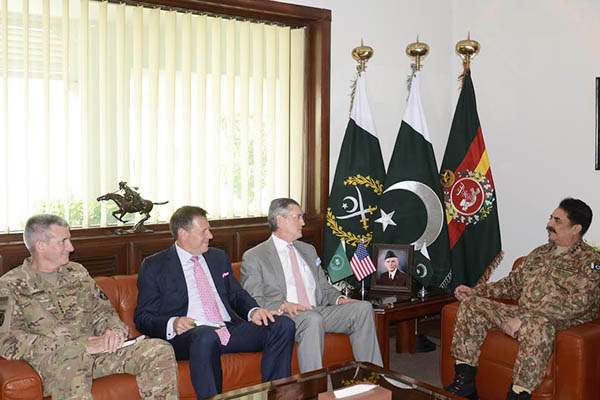 Or how to lose friends and make enemies.

What started two years ago is coming to an end. Pakistan’s Army chief, Gen. Raheel Sharif, was feted in Washington and all over the world for launching his Zarb-e-Azb operation against the Taliban in North Waziristan. In the middle of 2016, the general has run into a “bad patch” with the United States.

Gen. John Nicholson, Commander Resolute Support Mission in Afghanistan, and Amb. Richard Olson, U.S. Special Representative for Afghanistan and Pakistan, called on General Sharif and Sartaj Aziz separately. Both sides have fired volleys at each other and the world is left to ponder where the fraying relationship will go from here.

The above team came calling after the U.S. and India got into a closer embrace to complain together about Pakistan’s nurturing of terrorist elements on its soil that attack inside Afghanistan. General Sharif asked the visitors to go, instead, after the Pakistani warlord Mullah Fazlullah busy executing lethal acts of terrorism in Pakistan from inside Afghanistan.

The U.S. team complained that Pakistan continued to shelter the Afghan Taliban threatening to oust the Kabul government with only 9,800 American troops protecting it. General Sharif said Pakistan would no longer tolerate U.S. drone attacks inside Pakistani territory. The U.S. team countered that the recently droned Mullah Mansour was carrying a Pakistani ID card and that there were more like him allowed to ravage almost half the provinces of Afghanistan from their bases in Pakistan.

Pakistan senses that America is determined to withdraw from Afghanistan by halving the existing troops in 2017. Even the latest orders from Washington don’t clearly task them to go after elements like Fazlullah bothering Pakistan. Subliminally, the Pakistan Army is irked by the growing strength of India west of Pakistan and looks askance at Iran too for making this possible through the Chabahar trade artery.

Both sides will have to turn down their rhetoric.

The Americans simply want to do the familiar vanishing trick from a trouble spot that no one else can handle. Pakistan is internally disturbed by terrorism, which it can’t blame entirely on the recently captured RAW agent Kulbhushan Yadav. It is isolated globally and regionally while India is on the upswing even with Pakistan’s friends. If example is needed, Pakistan’s all-weather friend China is not isolated despite the American “pivot” in Asia. Pakistan can’t afford to be aggressive in this scenario and needs to consult its friends earnestly before it loses them. Today international isolation is half defeat; and nationalism anoints its wheels. Talks are needed and interlocutors need to be increased, preferably inside the four-power Quadrilateral Coordination Group devoted to sorting out the Afghan crisis.

In deed, talks are important to break the logjam. But, more importantly, the man at the helm in Pakistan, Gen. Raheel must take demonstrable measures to either bring Haqqani to talks or go hard against Talibans. If he continues to play footsie, as his predecessors did, Pakistan is bound to get into deeper crisis.