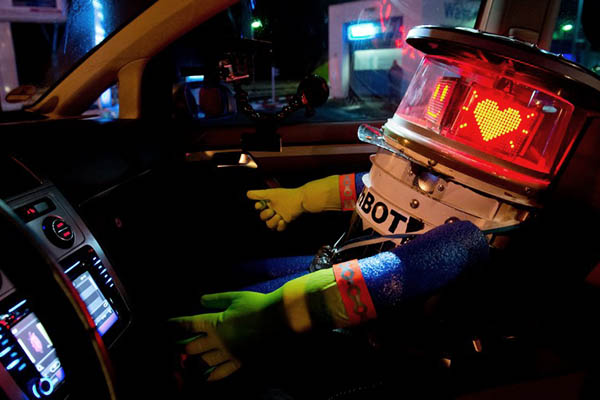 The hitchhiking HitchBOT was vandalized less than 300 miles into a journey to traverse the United States.

HitchBOT, the adorable hitchhiking robot pieced together from household odds-and-ends, ended its travels across America early, after being destroyed by vandals and left on the side of a road, its creators said.

Envisioned as a social experiment to see if its kind could trust humans, the talking humanoid got its answer—sadly—when it was found dismantled and left for dead in Philadelphia.

“Oh dear, my body was damaged,” the injured robot wrote on its website over the weekend. “I guess sometimes bad things happen to good robots! My trip must come to an end for now, but my love for humans will never fade. Thank you to all my friends.”

The little talking automaton had hitchhiked unscathed last summer across thousands of miles in Canada, and had traversed parts of Europe as well without so much as a scratch. But it had traveled from only just north of Boston to Philadelphia—a distance of about 300 miles, covered in about two weeks’ time—when it was torn asunder by unknown assailants off Elfreth’s Alley, the oldest residential street in the United States.

Researchers at Ryerson University in Toronto who devised the hitchBOT experiment, put the best possible face on the demise of their creation. “We know that many of hitchBOT’s fans will be disappointed, but we want them to be assured that this great experiment is not over. For now we will focus on the question ‘what can be learned from this?’ and explore future adventures for robots and humans,” they wrote on their website www.hitchBot.me.

They added: “We have no interest in pressing charges or finding the people who vandalized hitchBOT.”

With no one filing a formal complaint—and in a city that recorded 33 murders in the past month alone—police said they would not be investigating.

Nevertheless, a technology collective in Philadelphia, the Hacktory, said it would discuss resurrecting hitchBOT at a meeting on Thursday. “If we get the OK from the creators to repair or replace the needed parts for hitchBOT, we’ll be happy to do so,” it said on its blog. “If not, we understand… and we may just build ourselves a HitchBot2 to send along on its journey.”

HitchBOT had what was described as a “yard-sale aesthetic,” assembled for about $1,000 from parts found in a typical home or hardware store. The robot relied on the kindness of strangers to get from place to place. It was able to strike up a conversation and can answer trivia questions by consulting information using its built-in computers.

And hitchBOT was able to tell the driver who gave it a lift when it was tired and in need of recharging from a car’s cigarette lighter. It had a certain shabby chic charm, with an LED-lit smiley face wrapped in a transparent cake saver set atop a plastic beer pail, and had swimming pool noodles for limbs.

Its feet were rubber boots and it sported yellow latex gloves, including one with its thumb permanently extended to show it wanted to catch a ride.

Although its travels are apparently over, “we wish to remember the good times, and we encourage hitchBOT’s friends and fans to do the same,” the robot’s creators wrote.