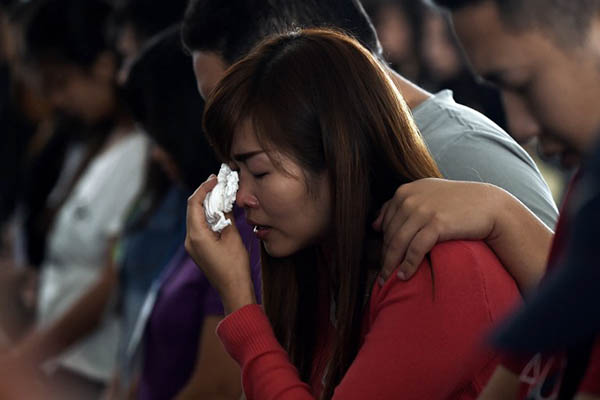 Investigators are still trying to piece together what led to the crash in the Java Sea.

Stormy weather forced Indonesian rescuers Wednesday to suspend their search for the bodies of 162 people aboard an ill-fated AirAsia plane, as investigators started trying to piece together why the flight plunged into the sea.

After two days of scouring the Java Sea for signs of the missing aircraft, search teams on Tuesday began recovering debris and bodies, sending relatives waiting anxiously for news into distraught outpourings of emotion.

Although officials promised another massive search on Wednesday, storms forced them to halt the hunt for the remaining bodies and the rest of the plane, which had been travelling from Indonesia’s second biggest city Surabaya to Singapore when it crashed. “We are experiencing bad weather now. Rains and winds prevented us from resuming the search operation this morning,” said air force rescue coordinator S. B. Supriyadi.

National Search and Rescue Agency chief Bambang Soelistyo told a press conference Wednesday that six bodies had now been recovered, including a woman in crew uniform. “As soon as the weather is clear, the bodies will be brought to Pangkalan Bun,” the town with the nearest airstrip to the crash site, said Soelistyo. Supriyadi said that hundreds of people from the military, police and national rescue agency were on standby waiting for clear weather in Pangkalan Bun.

The plane crashed into the Java Sea southwest of the island of Borneo, with debris including an exit door and a blue suitcase so far retrieved from the area. During Tuesday’s searches, an air force plane saw a “shadow” on the seabed believed to be that of the missing flight, where all search efforts were now being concentrated, Soelistyo said. Investigators were also looking into the cause of the crash, which is the third disaster for a Malaysian carrier this year.

Britain’s Air Accidents Investigation Branch said Tuesday that one of its investigators had arrived in Singapore and met with experts there who are assisting the Indonesian investigation.

Soelistyo said the hunt was on for the plane’s crucial black boxes, which would be handled by the national transport safety committee. “We have concerns to secure the flight recorders, believed to be with parts of plane we haven’t found,” he said.

Before take off the pilot had asked for permission to fly at a higher altitude to avoid the storm but his request was not approved due to heavy use on the popular route, according to AirNav, Indonesia’s air traffic control. In his last communication, the pilot said he wanted to change course to avoid the menacing storm system. Then all contact was lost, about 40 minutes after the plane had taken off.

“There were some very unique weather conditions and let’s wait for the investigation to be concluded,” flamboyant AirAsia boss Tony Fernandes told reporters on Tuesday in Surabaya, after meeting with relatives. “This is a scar with me for the rest of my life,” he said, describing the incident as an airline chief executive’s “worst nightmare.”

The missing plane was operated by AirAsia Indonesia, a unit of Malaysian-based AirAsia, which had previously earned a solid safety record. Of the 162 passengers and crew on board Flight QZ8501, 155 were Indonesian.

President Joko Widodo also met the victims’ families in Surabaya on Tuesday, where a crisis center has been set up, and he promised to ensure a huge search.

Relatives began crying hysterically and fainting as Indonesian television footage showed a body floating in the sea during aerial searches. “Before this everything was unclear. At least there is now some form of closure,” said businessman Agus Panjaya, 36, who had six relatives on the plane.

Early on Wednesday, relatives were gathering at the crisis center again, where they were expected to give documents to help with identifying the bodies.

The Pentagon said Tuesday that the U.S. Navy plans to send a second ship to help the search for the wreckage, which is already being assisted by Australia, Singapore, South Korea and Malaysia.

China, which had 152 citizens on board Malaysia Airlines MH370—the flight that vanished in March, offered to send a frigate and military aircraft to help with the international search.

The crash comes at the end of an awful year for Malaysian air travel. After the disappearance of Flight MH370, en route from Kuala Lumpur to Beijing with 239 passengers and crew, another Malaysia Airlines flight, MH17, was shot down over Ukraine in July, killing all 298 on board.