Home Lightbox Badaber: Now and in the Past

Badaber: Now and in the Past 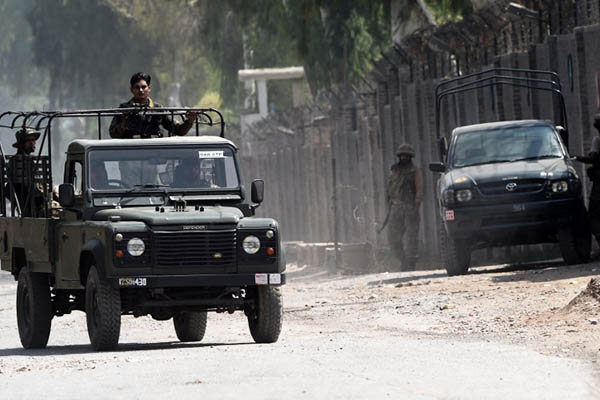 The Taliban’s attack on an airbase near Peshawar highlights positive and negative indicators of the military’s war on extremists.

Analyzing the terrorist attack on the Badaber Air Base requires understanding some indicators. But first, some history.

Badaber, a defunct facility, lies some 7 km south of Peshawar Ring Road, off the Peshawar-Kohat Road. The facility, since long, has been used by Pakistan Air Force as bachelor residential quarters for junior personnel working at the Peshawar airbase. But it has an interesting history.

By 1955, the United States Air Force and the Central Intelligence Agency began looking for a site for radio listening stations in ‘West Pakistan’ to monitor Soviet transmissions. It chose Badaber, an aloof, rural site just south of Peshawar. This was to be the station for the 6937th Communications Group or Unit.

Construction for the station started in 1958 after then-President Ayub Khan gave permission and allowed the U.S. to establish the facility on a 10-year lease. Badaber also acted as a communications station for U-2 spy planes flights from Peshawar airbase. At the peak of its operations, there were over 1,000 U.S. personnel housed at the station.

This is how a State Department ‘history’ document describes Badaber. “One may recollect that it answered to many names, accurate and inaccurate: Badaber, USA-60, Peshawar Air Station, USAF Peshawar, ‘the missile site,’ ‘the U-2 base,’ simply ‘that place’.”

A U.S. Embassy airgram, “38. Airgram A–550 From the Embassy in Pakistan to the Department of State, October 6, 1969” describes the station under “SUBJECT: USAF Communications Station, Peshawar, REF: Ankara for Ambassador Handley, Tehran for Minister Thacher, London for Minister Hughes, USAFI for Mr. Hilbert, CIA for Mr. Sheldon, NSA for General CARTER, USAFSS, DOD/ISA:

But much before the Station died and was interred, it came on the radar of the Soviet Union when the Soviets downed a U-2 piloted by Capt. Gary Powers and captured Powers. Khrushchev is reported to have encircled Peshawar on the map and threatened to strike the city. That greatly helped douse Islamabad’s enthusiasm to allow the station to work as a SIGINT post and communications center for U-2 flights from Peshawar airbase.

Ironically, however, the place was used again by the CIA, during the ‘80s, as a training facility for Afghan and other mujahideen fighting Soviet forces in Afghanistan. According to some accounts it was also used as an internment center for Soviet prisoners.

Since 2008, however, the entire area south of Peshawar on the Peshawar-Kohat Road, abutting in the west and south the Bara tehsil of Khyber Agency has become dangerous and has witnessed multiple attacks in and around Badaber and Mattani.

That the terrorists selected this site for the Friday attack is interesting.

Firstly, it is a soft target, lying in a Vulnerable Area (VA). Secondly, it houses personnel from the PAF. Thirdly, the residential quarters do not have high security. Fourthly, given the location and proximity to the tribal area, ingress is easy. Fifthly, the objective seemed to be to kill as many PAF personnel as possible.

The attack plan and the objective give us positive and negative indicators.

Plus: the choice of the target shows the capacity of terrorist groups to mount attacks on high-value, high-security VAs has depleted. Further, by TTP’s own admission it sent 14 terrorists for this operation. Official figures put the number of killed terrorists at 13. This is a large force compared to what we have seen in the past where lesser numbers were sent in to attack high-value, high-security targets. Most of those attacks took high toll of human life and also managed to destroy important equipment and platforms.

While the attack has managed to kill 16 defenseless men offering their morning prayer—and one officer during the ensuring siege—the inability of the attackers to do more damage or fight more effectively shows that recent operations have managed to arrest or kill the groups’ better-trained cadres.

From the positioning of the bodies of the deceased terrorists it appears that they were not as highly trained as the ones that mounted previous attacks. Some were caught in the open, which shows a lesser ability to use the ground to their advantage. They also appear to have either panicked when the firefight started or violated the buddy-pair rule, important in such encounters. My assessment is of course based on television footage.

Interestingly enough, while some of them—if not all—were wearing IED belts, none could explode them. Was it fear? Was it lack of training? Less confidence in a firefight? Questions abound.

Minus: despite losses, the terrorist groups retain the capacity to attack soft targets. In fact, given capacity degradation, future attacks will engage soft targets. That means more civilian casualties. They know that the state cannot safeguard every building. Their plans will factor that in. This means the security forces and intelligence agencies will have to be more vigilant in preempting such plans. This also means, far from euphoric voices about scoring a final victory over terrorism, that we have to accept, and live with, many more such attacks in the future.

A good benchmark of success in a war among the peoples will be our ability to deny these groups the possibility of successfully mounting big, spectacular attacks. In other words, if, over the next few years, we can live with this curse as a diabetic case, we will have done well.

That said, given the successes the non-state actors are notching in our west, especially in the Middle East, our job in the coming years is likely to become more, not less, difficult.

Captain (retd.)Ejaz Haider,
1- Badaber was used as a bait by Self Proclaimed & appointed Field Marshal (without fighting a war between 1948 and 1958)Ayub Khan, on behest of his family, friends and associates to try to get US state dept. to give a nod to ‘one of the big three automakers’ to set up an engine manufacturing unit in Pakistan near Badabir with extensive subsidies from the US govt.. The deal almost went through but Ayub Khan group’s greed – by seeking a large, up-front,’facilitation fee’ from the automakers, sole post production marketing rights etc. and right to disperse US subsidies for the deal – got the best of them and instead of Pakistan benefiting from futuristic technology of the time and a great manufacturing and industrilisation epi-center, (that could have catapulted to major leagues,a laggard, feudal dismal economy about to sink in the global competitive quick-sand),

2- Badaber station was used by MI/ISI etc.during the ‘De-briefing’ of some of the senior military officials after the release of 1971 war POWs from India.

3 – Badabir was used as a ‘De-emulsification facility’ for captured Soviet military, KGB officers and KGB operative.

(a) Despite Ayub promising confidentiality to the Chinese – after he was taken into confidence about a possible attack on India by China and using Pakistan’s foot soldiers to ‘infilterate ‘South-Easterly’ as far as sight and fully fueled trucks could run’ into Indian territory – Ayub went and spilled the beans to the British Intelligence to gain favours for settlement of Haripurian visa immigration seekers resulting from Dam construction in Pakistan with sub-contracts going mainly to Ayub Khan’s family and friends grouping as did the re-settlement of the Mirpurians in the UK. Chinese never trusted Ayub Khan again.

(b) Despite opposition from his ranking officials like Musa and Attiqur Rehman, Ayub wanted to strike a deal with the Brits instead of Chinese and Americans as the ‘dissenting officers’ had advised.

(c) Ayub Khan knew fully well that FBI & other law enforcement agencies inthe US and other parts of teh world were keeping close tabs on Ayub Khan’s Group of F(family)F(friends) &E(emissaries) had direct irrefutable link with US & European mafia families and money laundering facilitators but for the convenience of keeping Tabs on the communist regimes in the area, everything was kept hush hush ‘Observe but don’t touch’.
As a slap on teh Ayubism’s face – at a reception, hosted by Ayub’s FFEs, next door to Badabir to woo British & US investors, special scotch (pure single malts) were imported from Scotland with each bottle costing more than a Pakistani General’s monthly salary and imported wine from the Maison Rothschild by the plane load.

Just thought you and your readers would like to read some real history and not the one manufactured like in the govt. sponsored press in Pakistan. You would not want to classify your article in that category captain (retd) EH would you?