Baghdad Hit by Spate of Bombings 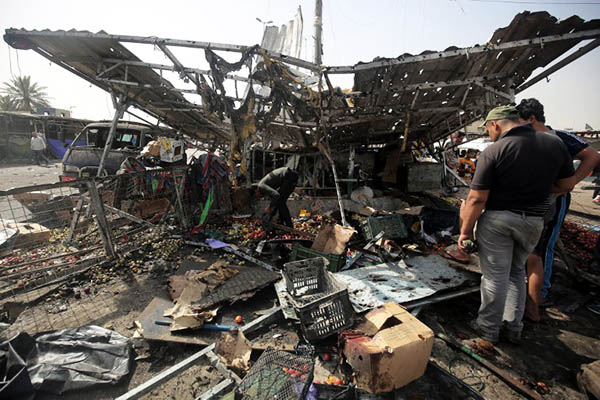 Attacks including suicide bombings killed at least 48 people in Baghdad on Tuesday, the second time in a week the Iraqi capital has been hit by a deadly spate of bombings. The attacks bring the toll for violence in and near Baghdad to more than 150 people killed in just seven days.

The unrest highlights the continued existence of significant flaws in Baghdad security procedures that have gone largely unaddressed even as U.S.-led forces train Iraqi forces for the fight against the Islamic State jihadist group.

The deadliest attack hit the Sadr City area in northern Baghdad, where a suicide bomber detonated an explosives-rigged vehicle, killing at least 24 people, security and medical officials said. I.S. issued a statement claiming the attack and confirming that it was carried out by a suicide bomber who detonated a car bomb.

Another attack hit the Shaab area, also in northern Baghdad, killing at least 21 people. Interior ministry spokesman Saad Maan said it was carried out by a female suicide bomber, while a police colonel said a roadside bombing was followed by the suicide attack. But the I.S. statement claiming the attack said the bomber was a man, whom it identified as Abu Khattab al-Iraqi. The assailant hurled hand grenades and then detonated a suicide belt, it said.

Attacks by female suicide bombers have become rare in Iraq in recent years. In some of the deadliest attacks by women in Iraq, two mentally handicapped women wearing suicide vests killed nearly 100 people at Baghdad pet markets in early 2008. Two women also detonated explosives at one of Iraq’s holiest Shia sites the following year, killing more than 60 people, while a 2010 attack on Shia pilgrims by a female bomber left over 40 dead.

In a third attack in the capital on Tuesday, a car bombing in the Rashid area of southern Baghdad killed at least three people, officials said.

The Baghdad attacks also wounded a total of more than 120 people on Tuesday.

Prime Minister Haider al-Abadi ordered the arrest of the security official responsible for the Shaab area, his office said. It did not mention similar action against officials in other areas that have been hit by attacks.

The premier also directed Iraq’s Joint Operations Command and the interior ministry to intensify intelligence efforts to “to uncover terrorist cells responsible for the criminal bombings in Baghdad,” according to another statement from his office.

There was no immediate claim of responsibility for the attack in Rashid, but I.S. has claimed a series of other attacks in and near Baghdad.

The jihadists carried out triple car bombings in Baghdad that killed at least 94 people, and a further 12 died in attacks on a police station west of the capital and a gas plant to its north. Attacks in the city decreased following a June 2014 I.S. offensive that saw its fighters focus on holding territory and fighting battles in other areas. But Iraqi forces have regained significant ground from I.S., and the frequency of attacks in the capital has increased in recent weeks.

While thousands of Iraqi security personnel have been trained by U.S.-led coalition forces to fight I.S., major security flaws persist in Baghdad. Fake bomb detectors are still in widespread use across the city despite the fact that the man who sold them to Iraq was sentenced to jail for fraud three years ago. And while checkpoints around the capital cause major traffic jams, they have a questionable impact on security, as checks of document and searches of vehicles are cursory if they take place at all.