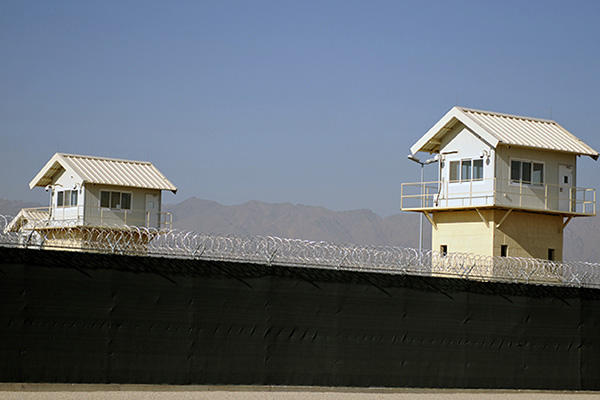 In a ‘prison within a prison,’ the U.S. continues to operate in Bagram.

The U.S. handed over control of Afghanistan’s Bagram jail to the Kabul government three months ago. But nothing has changed for dozens of foreign inmates still locked up inside “the Afghan Guantanamo.”

After years of imprisonment, some 60 non-Afghan detainees—mostly Pakistanis but also Saudis and Kuwaitis—are still denied face-to-face access to lawyers and have not been charged with any crime. The foreigners were exempted from the U.S. handover in March of more than 3,000 Bagram prisoners to Afghan authorities. Their situation has prompted comparisons with detainees at the U.S. prison at Guantanamo Bay in Cuba.

In a miserable hamlet with the soulless name “Village 105,” lost in the vast Punjab wheat fields outside the town of Faisalabad, Abdul Razzaq keeps treasured photos of his brother Amanatullah Ali. It has been nearly 10 years since they saw each other. After the fall of Saddam Hussein, Ali went to Iraq—for pilgrimage, his brother says.

But he and his friend Yunus Rahmatullah were arrested by British troops as suspected militants and handed over to the Americans.

Many fighters ended up being sent to Guantanamo. But because Ali and Rahmatullah spoke Urdu and not Arabic, they were taken to Afghanistan where U.S. forces had translators to interrogate them. “His wife contacted us and said she had had no news from him for six or seven months, then they searched for him but found no trace and we feared he had been kidnapped or killed,” Razzaq said.

In 2005 the family received a letter, proof at last that he was still alive. Four years later Ali spoke to his family for the first time by phone. “I asked him, ‘Do you have any problems in jail?’” said Razzaq. “He replied, ‘Jail is in itself the problem.’”

Now every few months Razzaq travels the 450 kilometers from his village to Islamabad where he can see and talk to his brother by Skype at the International Committee of the Red Cross offices. American authorities cut the line when they move onto topics deemed too sensitive.

A U.S. defense official said Washington considered the detainees to be “enemy combatants” and they do not enjoy legal rights that would be accorded to a criminal suspect in an American civilian court. The official declined to say whether the detainees have access to a lawyer, and acknowledged they will remain behind bars indefinitely as long as U.S. forces stay in Afghanistan.

But the release process is long and complex. Britain’s Supreme Court has already ruled that Rahmatullah’s transfer to Bagram and detention there are illegal but he is still inside.

“With the drawdown happening and the U.S. pulling out of Afghanistan it’s creating an even bigger question of what are you going to do with these guys,” said Sarah Belal, a lawyer defending Bagram detainees she has never met. “There is a prison within a prison controlled by the U.S. forces because they are holding these 60 detainees, so this is what we mean by legal black hole: these people have no recourse to any courts or any rights.”

In Bagram as in Guantanamo, the U.S. faces challenges deciding what to do with detainees it regards as dangerous who have been held in some cases for years without trial—an issue that has fuelled anti-American sentiment in the Muslim world.

Washington has repatriated foreign terror suspects imprisoned for years without trial in Bagram, but each case is a bureaucratic maze. The Bagram Review Board must give the initial approval, which then goes to the Department of Defense in Washington for confirmation. The U.S. government must then be satisfied that the receiving country will not torture the detainee and that the possible threat he poses will be taken into account. After that he must obtain an Afghan exit visa.

The process can drag on for years. Rahmatullah got the thumbs-up from the Bagram board three years ago but is still in detention.

Kamil Shah went through this tortuous process to secure his freedom. He is now trying to rebuild his life in Kohistan, a mountainous region in northern Pakistan.

In 2004, aged 17, Shah said he crossed into Afghanistan to seek treatment for a sick friend in Kandahar—the heartland of the Taliban movement. But on his way there, American forces arrested him. The U.S. soldiers did not believe his story and he was thrown into Bagram as a suspected Taliban or Al Qaeda militant, where he met Amanatullah Ali.

“Sometimes we were thinking we would never get out of jail. I was thinking I do not exist, I am already dead,” Shah said. Four years after his release Shah must still notify the police whenever he wants to leave his village. With no qualification and no job, he struggles by and says he wishes he could clear his name.

“When they told me they wanted to release me I told them I am not going out till you write a letter saying Kamil is innocent,” Shah said. “The colonel told me ‘I am telling you that you are innocent but I cannot write you a letter.’”