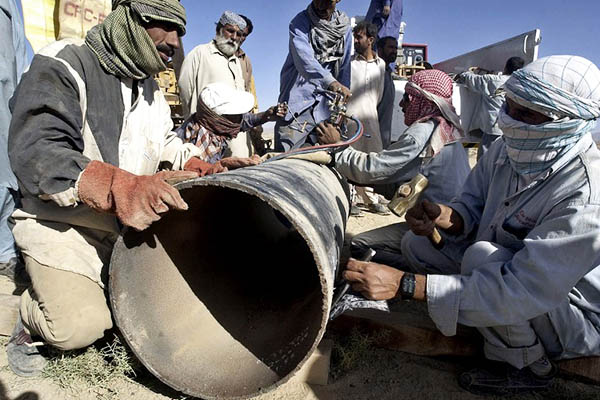 Workers repair a damaged pipeline after its was blown up by suspected tribal rebels in Mastung, 2006. Banaras Khan—AFP

The explosions occurred Sunday night near the Punjabi city of Rahim Yar Khan, which lies close to the border with Balochistan, said Arif Hameed, a spokesman for Sui Northern Gas company. “Three gas pipelines were simultaneously blown up, measuring 36, 18 and 13 inches in diameter, that disrupted gas supply to Punjab,” he said, adding workmen would have the lines repaired over the next two days.

Sarbaz Baloch, a spokesman for the Baloch Republican Army, told AFP by phone his group had carried out the attacks.

Balochistan is Pakistan’s biggest but least populous and least developed province. A long-running separatist movement is seeking more autonomy and a greater share of natural resources, including the gas the province supplies to the whole country.

Hameed said Punjab, home to around 100 million people, was being supplied by a single pipeline as a result of the attack. “We are working on the 36-inch pipe, hopefully it will be repaired by Tuesday morning and 70 percent of the gas supply will be restored,” he said.

A bomb attack claimed by the separate Baloch Liberation Army on Monday in the district of Sibi injured 11 paramilitary troops, according to spokesman Abdul Wasey.

Such a shame!! Our balochis have to suffer those terrorists. We should do an operation against these separatists