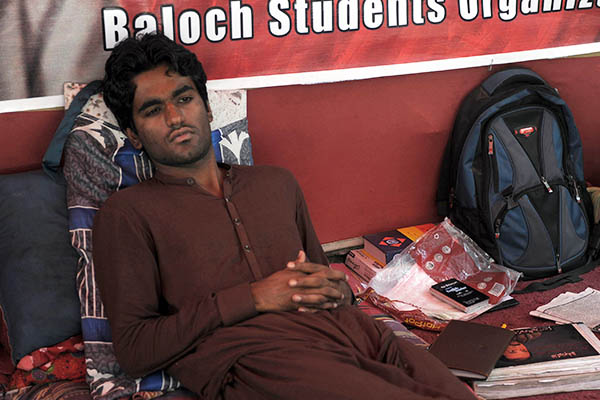 Lateef Johar has been on a hunger strike for the past month and vows he will not stop until Zahid Baloch is returned.

Eyes yellowing but sparkling with determination, Lateef Johar vows to carry on his month-long hunger strike until his missing leader is recovered—or he dies and another young Baloch takes his place.

A month ago the 23-year-old sat outside the Karachi Press Club and refused to eat any food until Zahid Baloch, the chairman of the Azad group of the Baloch Students Organization (BSO), had been returned. Security forces allegedly picked up the missing man on March 18 in Quetta.

For a month Johar and other BSO activists searched for their chairman, but in vain. With the hunt attracting little attention, the central committee of the BSO decided to launch a hunger strike “unto death” and Johar offered himself as the maiden volunteer.

“We just want that at least the world must know what is going on with us and how the state is suppressing our movement by kidnapping and killing our fellows,” Johar said.

The BSO is one of the largest Baloch student movements and favors independence for the vast, mineral-rich province. Some accuse it of links to violent separatist groups who have waged a 10-year insurgency, with regular bomb and gun attacks on security forces and other symbols of the Pakistani state.

Johar has lost 21 kilograms of his body weight since beginning his protest and his frailty is obvious as he becomes breathless while talking.

Doctors say he is heading towards death. “I am quite worried about his survival as he is so stubborn that he refuses to take even any medication,” said Birma Jesrani, a doctor who regularly examines Johar. “I am afraid he could encounter a sudden medical condition any time and I don’t think he could last another month.”

Johar endures heat, humidity and the constant prick of mosquito bites in a tent in the teeming port city, a small book on Latin American revolutionary Che Guevara and a red-covered laptop by his side. “I feel vertigo when I go to the toilet and walk even just a few steps. I just try to take 12 to 15 glasses of water daily,” said Johar. “I cannot sleep and keep changing the side and posture till morning. I start reading books or messaging on social media but the headache doesn’t let me do this for long,” he said.

Despite the hardship, he says he is determined to carry on. “We are fully committed to sit on hunger strike and if I die someone else will replace me,” Johar said. “We believe in peaceful struggle and we cannot pick up the gun, so this is our way to tell the world about our struggle.”

In recent years many people suspected of links to Baloch separatist groups have mysteriously disappeared, allegedly at the hands of Pakistan’s intelligence agencies, and never been seen again. Sometimes they reappear after months or years in detention. Or dead, their bodies left by a road or in a riverbed, a strategy dubbed “kill and dump.”

Baloch campaigners say the missing number in the thousands but the authorities dispute this, putting the figure at less than 100. They also say that militant Baloch separatist groups are responsible for many of the disappearances.

“We are undeterred and we shall continue our struggle even if ‘something happens’ with our chairman,” Johar said, hinting at his worst fears about the missing student leader.

Karima Baloch, the young Baloch woman who has taken over as chair of BSO and sits vigil with Johar at his protest camp, points the finger at the government’s paramilitary Frontier Corps. “We have ourselves witnessed how the men in FC uniform and in plainclothes took Zahid with them in our own presence,” said Karima, her face veiled in traditional Baloch style.

Manzoor Ahmed, a spokesman for the FC in Quetta, vigorously denied the claim. “This is a baseless allegation—we are not involved in kidnapping of anybody,” he said. “These are allegations that we have illegally detained people, our commandant has strictly forbidden us to take part in any illegal act.”

BAP to Field Quddus Biznejo for Next Chief...

KILLING KIDNAPPING MISSING PEOPLES BY AGENCIES CMs GOVERNMENTS ARE COMMON NO SAVE AND SECURITY IN PAKISTAN EVEN THEIR HOMES?

ML-N AND PEOPLES PARTY LOOTED AND LOOTING PAKISTAN ITS PEOPLES AND TREASURY . NO ACTION HAS BEEN TAKEN SO FAR FROM CJ PAKISTAN OR ARMY?