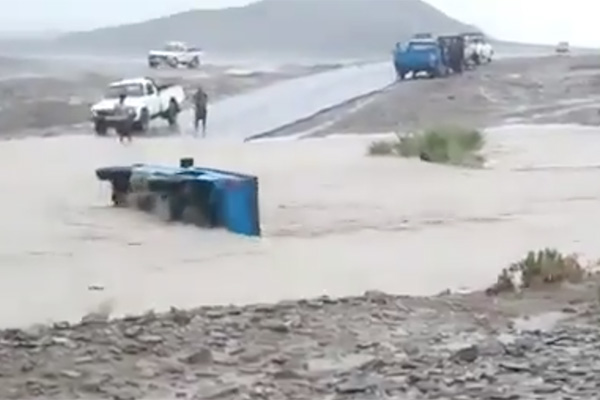 At least 10 people have died to rain-related incidents across Balochistan province, provincial spokesman Liaquat Shahwani said on Monday, adding that rescue operations were ongoing with helicopters, road vehicles and camels being utilized to help save lives in danger from floods.

Urging the National Highways Authority to participate in the rescue operation and assist local administrations in restoring road linkages to areas that had been cut off from easy access, Shahwani said the Bibi Nani and Pinjara bridges had collapsed due to the heavy rains and had yet to be repaired. To restore transport linkages, he said the Quetta Railways Authority had been requested to start a special shuttle service between Sibi and Quetta.

“Control rooms had been set up to monitor the flooding across the province on emergency basis,” said the spokesman, adding that the Provincial Disaster Management Authority was also conducting relief activities. He said 1,100 packages that included edibles, medicines, blankets, and other necessary items had been dispatched for the people affected by the rains.

The spokesman said that the water level in small dams in the province had risen to dangerous levels due to the heavy rains, adding that it was unfortunate that the province had suffered from this tragedy while it was still coping with the coronavirus pandemic and the locusts invasion.

Separately, the World Health Organization agreed to assist the Balochistan’s government flood relief activities, as well as its efforts to improve the provincial healthcare structure.