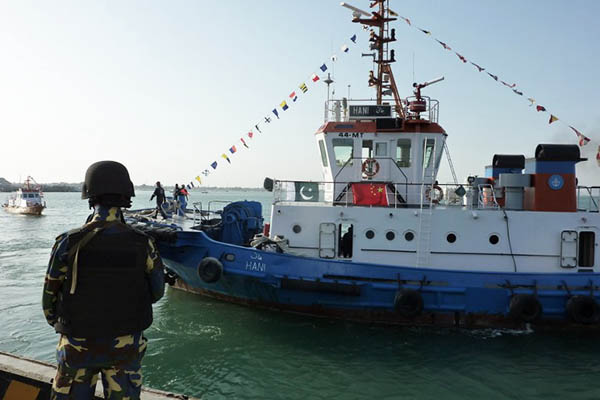 Rebels, businesses are hoping to cash in on Chinese investment in restive province.

Militant commander Hazar Khan gave up his 15-year insurgency in Balochistan last year, and now he hopes for a job with the very government he stood against, as the province prepares for a great leap forward fuelled by Chinese investment. “We people came because our life has already passed in the mountains and now our children’s lives should be better,” said Khan, who has returned to his old tribal life of farming as he seeks government employment. “Now, nobody from my family is in mountains, all have surrendered along with me.”

The decision, he said, was sweetened by the government’s offer to pay him Rs. 300,000 rupees under a “General Amnesty Scheme” authorities say has convinced hundreds of insurgents to surrender—though, Khan added, he has yet to see the money.

Balochistan has been wracked for years by Islamist, sectarian and separatist violence that in the past rendered the province virtually a no-go zone for outsiders. The province is Pakistan’s most unstable and underdeveloped province, with the majority of its estimated 8.5 million people living in poverty.

Suppressing the rebellion by force in the desolate province, much of which is desert and mountains, has proven difficult. But an ambitious bid by Beijing to gain greater access to the Middle East, Africa and Europe through Pakistan has given new impetus to the push for stability.

The $46 billion China-Pakistan Economic Corridor (CPEC) is set to culminate in the Baloch fishing port of Gwadar. With its dusty moonscape and shining new port, officials have repeatedly suggested the city is another Dubai in the making.

Property prices are soaring there and in provincial capital Quetta as Baloch authorities claim they have restored peace to the majority of the province. Small businesses driven from Quetta by violence over the years are also returning, ready to take advantage of increased security and China’s interest.

A decade ago the security situation was “very bad,” said Nadir Hussain, owner of a printing and publishing house in Quetta, adding that he had considered leaving like his fellow businessmen. With increased stability, however, “people have come back and started small businesses, opened small shops… It is improving, slowly,” he told AFP.

“We have restored peace in 95 percent of Balochistan,” said Akbar Durrani, the provincial home secretary. Some 600 insurgents have surrendered since the government began offering the compensation package last year, he said: Rs. 1.5 million to commanders, Rs. 1 million to their deputies, and Rs. 500,000 to foot soldiers. The scheme could backfire, however.

“The authorities are not paying the promised compensation of Rs. 500,000,” said Nawab Changez Marri, chief of the Marri tribe and provincial irrigation minister. “They are paying them only Rs. 100,000 and then leave them on their own without even ensuring security,” he said, adding that in some cases insurgents have killed the families of those who surrendered.

Marri said he had helped persuade many militants to surrender—but that the failures have seen others who were ready to lay down their arms change their minds.

Security issues have mired CPEC in the past, with separatist rebels—who oppose Gwadar’s development while the province is not independent—blowing up numerous gas pipelines and trains, and attacking Chinese engineers.

China says it is confident the Pakistani military, which has been repeatedly accused by international rights groups of abuses in Balochistan, is in control of the issue. “I believe the security situation has improved to a great extent,” Zhao Lijian, acting Chinese Ambassador told a conference on CPEC in Gwadar in April, crediting the Army.

In the long-term, ensuring stability and the success of CPEC could depend on the government’s ability to make sure the Baloch population—rather than the establishment in Punjab—benefit, observers say.

Profits will have to be shared with Balochistan—“otherwise we resist,” one senior Baloch leader said on the sidelines of April’s conference in Gwadar.

Provincial ministers and military leaders at the conference were bombarded with questions from a lively audience concerned that CPEC gains would bypass them. “Security issues and political differences are casting doubts about [the corridor’s] future,” Mir Muhammad Akbar Mengal, senior vice president of the provincial Chamber of Small Traders and Industries, told AFP in Quetta. “Its success is local people’s success,” Atta Muhammad Jaffer, a retired senior government official and a livestock trader, said.

Mengal said the Baloch have high hopes for the corridor. “[Success] only depends on the government’s commitment… The people of Balochistan are ready for cooperation,” he said.

Prime Minister Nawaz Sharif has formed a committee of provincial chief ministers to address the concerns and officials remain bullish about the Herculean task before them. “This CPEC project is a fate changer,” says Anwaar-ul-Haq Kakar, a spokesman for the Balochistan government.