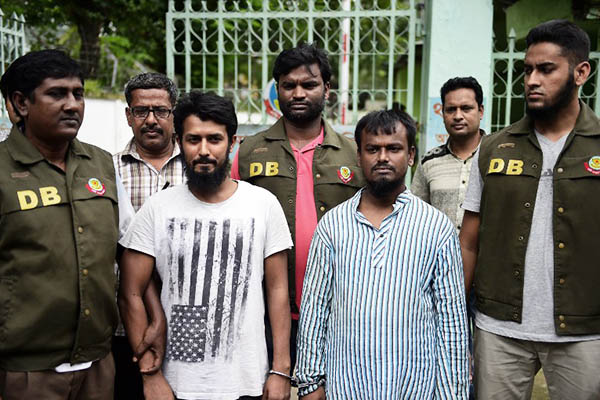 Bangladesh’s elite security force on Thursday arrested the head of a banned hardline Islamist group over the murders of two atheist bloggers that has sparked an international outcry.

The Rapid Action Battalion (RAB) arrested Mohammad Abul Bashar, head of an Islamic group called Ansarullah Bangla Team (ABT) which was banned in May over a series of blogger killings. Two other members of the ABT were also arrested in Dhaka, said Mufti Mahmud Khan, a spokesman for the RAB, which is tasked with tackling militancy in the Muslim majority nation.

“All three are the suspects in the murders of bloggers Avijit Roy and Ananta Bijoy Das,” Khan said, referring to the writers who were killed earlier this year.

Four secular bloggers have been hacked to death in Bangladesh since the start of the year, including Roy and Das, sparking international condemnation and protests mainly by secular activists in the capital.

Bashar, 43, is the most high profile person to have been arrested in connection with the blogger murders this year and the move came after a series of arrests of suspected Islamist militants in the past few weeks.

“We arrested them in the capital’s Fakirerpool neighborhood this morning. They were planning to flee the country,” said RAB Major Kamran Kabir. “Among those we’ve arrested in connection with the blogger murders in recent weeks, Bashar is the biggest fish,” Kabir said.

Khan said Bashar took over leadership of the ABT after his older brother, the group’s founder and spiritual leader, was arrested in 2013 over the murder of another blogger, Ahmed Rajib Haider. The leader, Jashim Uddin Rahmani, ordered the murders of the bloggers from his jail cell this year, a message that Bashar took to their followers, the RAB has said previously.

The RAB hailed the arrest of Bashar as a “major success” in the force’s efforts to hunt down the blogger killers.

The two others arrested on Thursday, Julhas Biswas and Jafran al Hasan, “took part in the killing mission” of the two bloggers and tweeted admitting the group’s role in the murders on the Internet, the RAB has said previously. “These two are members of the media branch of the ABT,” Khan said Thursday, referring to the group’s PR team.

Roy, a U.S. citizen who was born in Bangladesh, was murdered in February by a gang wielding machetes in Dhaka. Das, 33, was killed in a similar fashion as he went to work at a bank in Sylhet on May 13.

Prime Minister Sheikh Hasina’s secular government has vowed to hunt down the killers, following international outrage and accusations it failed to stop the attacks, wary of a political backlash from Islamists. Police have stepped up security for those being threatened and thought to be on the hitlist drawn up by a hardline Islamist group.

Last week five ABT militants were charged over the murder of atheist blogger Washiqur Rahman, who was killed in March. Islamists have long clashed with young secular activists whom they consider infidels for criticizing Islam on social media, some of them under pen names.

But the gruesome killings have shaken many in Bangladesh, which prides itself on being a mainly moderate Muslim country. The impoverished and officially secular nation of 160 million has largely rejected Islamic extremism since gaining independence from Pakistan in 1971.