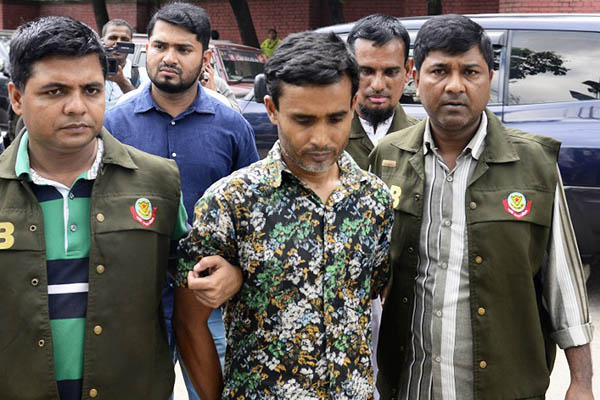 Police claim suspect is a member of a local militant group that has targeted secular and atheist bloggers.

Bangladesh police have arrested a suspected Islamist militant over the hacking to death of two gay rights activists, part of a spate of murders of intellectuals, writers and religious minorities, officers said Sunday.

Xulhaz Mannan, an editor of a magazine for Bangladesh’s gay and lesbian community, and fellow activist Mahbub Tonoy, were murdered in a Dhaka apartment last month by about six men carrying machetes and guns. Police on Saturday arrested 37-year-old Shariful Islam Shihab, described as a member of a local Islamist militant outfit that has been blamed for a string of similar gruesome murders of secular and atheist bloggers.

“We’ve arrested one man in connection with the murder of Xulhaz Mannan,” said Dhaka police spokesman Maruf Hossain Sorder. “He is a member of the Ansarullah Bangla Team,” he said, adding that the two activists were murdered on the orders of the ABT leadership.

Washington has condemned the killings of 25-year Tonoy and Mannan, 35, who worked for U.S. government aid organization USAID, as pressure mounts on Bangladesh to curb the attacks and bring those responsible to justice. Both men had received threats from Islamists over their championing of gay rights.

At a press briefing in the capital on Sunday, police said Shihab—who has denied carrying out the killings—owned one of two guns used in the murders and has also supplied arms and bombs for previous ABT operations.

Police seized Shihab in the western town of Kushtia, where he allegedly heads an ABT unit, after raids on several properties, in what Dhaka counter-terrorism chief Monirul Islam said was a “breakthrough” in the case. “They killed the gay rights activists because they were creating confusion about Islam,” Islam said, adding the investigation was ongoing.

Al Qaeda in the Indian Subcontinent (AQIS) has claimed responsibility for killing the pair, saying the two men had worked to “promote homosexuality” in Bangladesh. But Bangladesh police chiefs have said their murders have the hallmarks of local Islamists, while the secular government has blamed the opposition.

The arrest comes after an elderly Buddhist monk was found hacked to death on Saturday in a temple in the southeastern district of Bandarban—the seventh such killing since the start of last month.

Two Muslim Rohingya refugees, who fled persecution in Myanmar, and a member of the Chak ethnic community to which the monk belonged are being held for questioning over his murder, local police inspector Anisur Rahman told AFP.

Suspected Islamists have been blamed or claimed responsibility for the scores of murders carried out since last year, as fear grips the Muslim-majority nation over the rising violence. Last year four secular bloggers and a publisher were hacked to death, while Christians, Hindus and Sufi, Ahmadi and Shia Muslims have also been killed since.

No one has yet been convicted over those deaths, despite a number of arrests.

The Islamic State group has claimed a number of the killings, but authorities insist there is no evidence of the group’s presence in Bangladesh.

A long-running political crisis in Bangladesh has radicalized opponents of the government and analysts say Islamist extremists pose a growing danger.

Bengali people, they would do anything as long as they’re paid for it. Even write about their adventures in homosexuality, along with how it’s okay to be a kafir in the open-sun on a Muslim dominant population. What’s next? A country like Bangladesh with Hindu kafirs hiding left and right you’d know that the slow infiltration is already at work, to hell with them, we need to look out for ourselves.