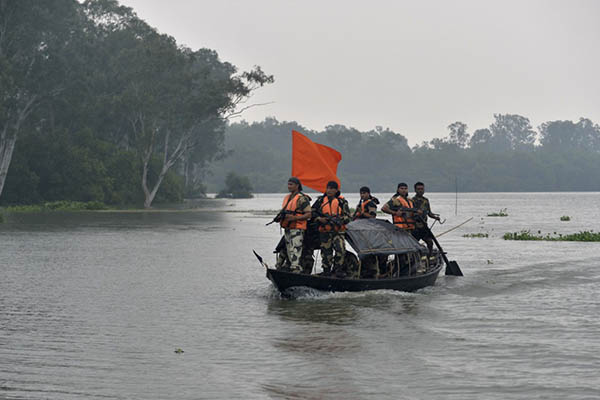 An Indian paramilitary guard was killed and another critically wounded after they were fired upon by Bangladeshi troops at a border river on Thursday, Indian security forces said, the first deadly frontier clash between the nations in years.

The incident in the Indian state of West Bengal took place after Bangladesh detained three Indian fishermen for allegedly sailing into their waters searching for Hilsa, a popular fish in regional cuisine. Two of the fishermen were released or escaped and informed Indian border guards of their detention.

Six Indian guards then took a boat to an island on the Padma River to secure the release of the third fisherman from their Bangladeshi counterparts, India’s Border Security Force (BSF) said.

The BSF said a “border guard was killed and another critically injured in firing by Bangladeshi border troops along the riverine border.” But in a statement late Thursday, Bangladesh said Indian troops fired first after they “forcibly tried to take the detained fisherman” and their border personnel resisted them.

The Indian soldiers “got angry and opened fire and they drove their speedboat back to India by firing all the way. Then the [Border Guard Bangladesh] patrol team fired back in self defense,” the BGB said.

The Indian border force named the slain maritime officer as Head Constable Vijay Bhan Singh. The second guard was taken to hospital, where he was fighting for his life.

Bangladesh said officials from both sides met after the incident and agreed to investigate the encounter and hold future talks.

Illegal fishing is not uncommon in the Sunderbans, a UNESCO world heritage site that straddles the border of India and Bangladesh and is famous for its mangrove forest. Thousands of people fish in the area around the year. Fishermen detained on both sides are usually released after talks between border officials.

Border relations between India and Bangladesh have been good, and this is the first fatal incident in recent times.

Earlier, in August 2005, guards on both sides exchanged fire over repairs on the Mahananda river, in West Bengal, with no casualties.