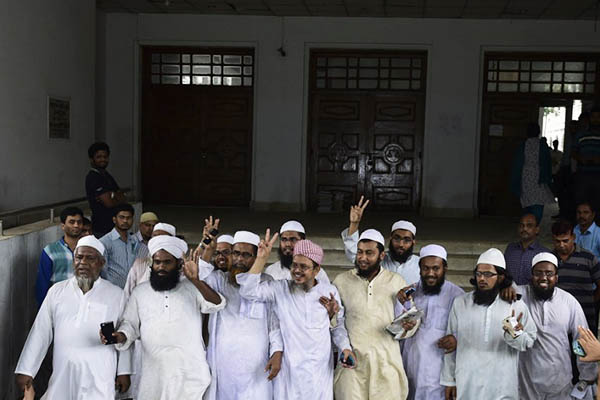 Special bench refuses to hear any testimony and scraps petition within moments of opening case.

Bangladesh’s high court on Monday rejected a petition by secular activists to scrap Islam as the state religion in the wake of nationwide protests by hardline Islamist groups.

A special bench of three judges threw out the petition within moments of opening the case and without allowing any testimony, an AFP correspondent at the court said. The petition, which was first launched 28 years ago, has triggered countrywide protests by Islamist groups in the impoverished nation.

“We are saddened [at the ruling]. It’s a sad day for the minorities of Bangladesh,” said Subrata Chowdhury, who represented the secular activists in the case. The court did not allow the petitioners to state their case or present any arguments, he said. “The judges simply said the rule is discharged.”

Bangladesh was declared officially secular after the 1971 war of independence from Pakistan, which created the nation from what was previously East Pakistan. In 1988 then-military ruler General Hussain Muhammad Ershad elevated Islam to the state religion in an attempt to consolidate power. Secularists have argued for decades that having Islam as the state religion conflicts with Bangladesh’s secular charter and discriminates against non-Muslims.

More than 90 percent of Bangladesh’s population is Muslim, with Hindus and Buddhists the main minorities.

The country’s largest Islamist party, the Jamaat-e-Islami, responded to the court’s decision by withdrawing its call for a nationwide strike. It described the outcome as a “victory of 160 million people.” Hefazat-e-Islam, a hardline Islamist group that has staged violent demonstrations in recent years, also welcomed the court’s move.

“We thank the high court for rescuing the country from a massive disaster,” said Hefazat’s organizing secretary Azizul Hoque Islamabadi.

The court’s decision to throw out the case threatens to heighten tensions between secularists and hardliners in the conservative nation, which has recently seen a spate of killings of atheist bloggers, religious minorities and foreigners. The Islamic State group has claimed responsibility for many of these incidents, but the government of Prime Minister Sheikh Hasina blames the banned domestic group Jamayetul Mujahideen Bangladesh for the upsurge in deadly violence.

Some 7,000 activists had taken to the streets of the capital Dhaka after prayers last Friday, chanting anti-government slogans and holding banners to protest against the high court’s move to hear the plea. Bangladesh has been plagued by unrest in the last three years and experts say a long-running political crisis has radicalized opponents of the government.

The secular government launched a nationwide crackdown on Jamaat in 2013, detaining or prosecuting tens of thousands of activists. A controversial war crimes tribunal has ordered the execution of several top Jamaat leaders, dividing the country and sparking deadly protests.