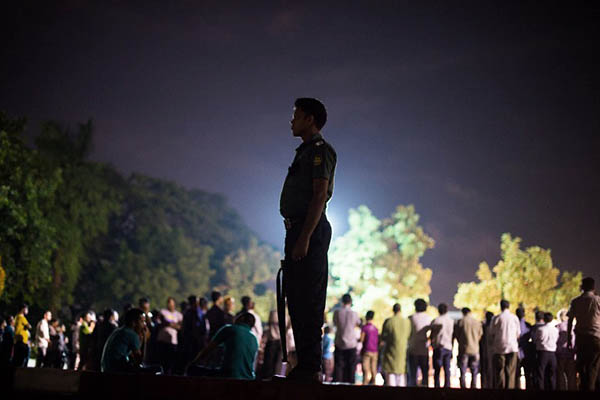 Dhaka maintains extremist group is not present in country despite several attack claims in recent months.

Bangladesh said on Sunday the attackers who slaughtered 20 hostages at a restaurant were well-educated followers of a homegrown militant outfit who found extremism “fashionable,” denying links to the Islamic State group.

As the country held services to mourn the victims of the siege in Dhaka, details emerged of how the attackers spared the lives of Muslims while herding foreigners to their deaths. And although the Islamic State group claimed responsibility for the attack at the Western-style café on Friday night, the government stuck to its line that international jihadist networks had not gained a foothold in Bangladesh.

Home Minister Asaduzzaman Khan told AFP the killers—six of whom were shot dead in the siege—were members of the homegrown militant outfit Jamaeytul Mujahdeen Bangladesh (JMB), a group banned over a decade ago. “They have no connections with the Islamic State,” Khan said.

National police chief Shahidul Hoque told reporters that investigators would explore the possibility of “an international link” but added that “primarily, we suspect they are JMB members.”

The bodies of 20 hostages were found in pools of blood after commandos stormed the Holey Artisan Bakery café to end the standoff, in which two policemen were also shot dead in a fierce gunbattle at its outset. Six of the gunmen were killed by the commandos in the final stages of the siege, but one was taken alive and was being interrogated by Bangladeshi intelligence.

Security officials said most of the victims—18 of whom were foreigners—were slaughtered with sharpened machete-style weapons.

Hasina’s government has previously blamed a string of deadly attacks against religious minorities and foreigners on domestic opponents but the latest will heighten fears that I.S.’s reach is spreading.

Despite the government’s denials, the I.S.-linked news agency Amaq published extensive details of the attack, including photos from inside the cafe and the numbers of dead. Analysts say that the government is wary of acknowledging that groups such as I.S. or Al Qaeda are operating in Bangladesh over fears that it will frighten off foreign investors.

“They may be homegrown but certainly there are linkages [to I.S.]. We really can’t deny it,” said Joyeeta Bhattacharjee, a fellow of the Delhi-based Observer Research Foundation.

There was mass condemnation of the killing in Dhaka, where flags were being flown at half-mast at government offices, while prayer services were held across the country. Candles were lit at a mausoleum in the center of Dhaka in a nighttime ceremony where mourners sang songs of unity and then stood in silence for 30 minutes in a solemn tribute to the victims.

“We’ve come to take a vow that we won’t allow the country to become a terrorist hotspot,” said Hanif Khan, a poet and fiction writer who joined the rally. “We have taken a pledge to keep the country secular and safe for all its citizens. We’ll fight to the end to achieve that goal. Bangladesh emerged as a secular nation and will remain so.”

The agony was felt far beyond Bangladesh, with Italy mourning the death of nine citizens in the attack while seven Japanese were also killed.

A Bangladeshi worker at the café who survived the massacre told how the attackers split the diners into groups of foreigners and locals, making clear that their targets were non-Muslims. “They took me and two of my colleagues and forced us to sit on chairs, with our heads down on the table,” the survivor told AFP on condition of anonymity. “They asked me whether I was a Muslim. As I said yes, they said they won’t harm or kill any Muslims. They will only kill the non-Muslims. All the time I prayed to Allah, keeping my head down. Several times I vomited. They warned us not to raise our heads but at one point I raised my head slightly and saw a bloodied body on the floor.”

The worker described the killers as appearing to be university-educated, a point echoed by Khan. Asked why they would have become Islamist militants, the minister said: “It has become a fashion.”

The attack, by far the deadliest of a recent wave of killings claimed by I.S. or a local Al Qaeda offshoot, was carried out in the upmarket Gulshan neighborhood, which is home to the country’s elite and many embassies.

Last month authorities launched a crackdown on local jihadists, arresting more than 11,000 people but critics allege the arrests were arbitrary or designed to silence political opponents. Bangladesh’s main Islamist party has been banned from contesting polls and most of its leaders have been arrested or else executed after recent trials over their role in the 1971 war of independence from Pakistan.