Bangladesh Deploys Troops Ahead of Elections 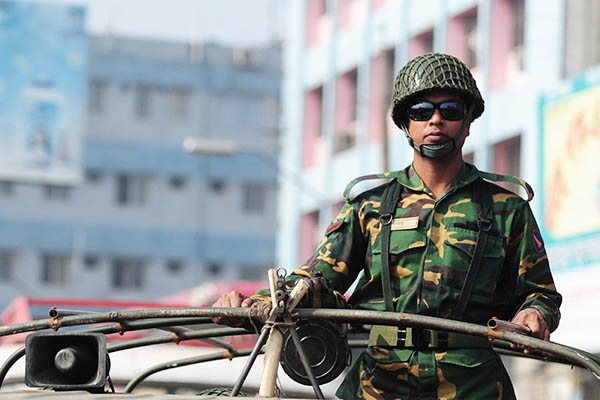 Dhaka hopes to avoid further unrest by deploying armed forces across the country ahead of planned opposition protests.

Bangladesh deployed tens of thousands of troops on Thursday in a bid to contain deadly political violence ahead of elections next month, which are being boycotted by the opposition.

With Prime Minister Sheikh Hasina determined that the Jan. 5 general elections go ahead despite claims that they will be a farce, troops are being sent to nearly every corner of the country at the end of its deadliest year for political violence since independence. The deployments are expected to further infuriate the main opposition Bangladesh Nationalist Party, which called for a mass march on Dhaka beginning on Dec. 29 in a bid to scupper the polls.

Election Commission spokesman S. M. Asaduzzaman said that troops would be deployed in at least 59 of the country’s 64 districts. “They’ll be used as a striking force if there is any violence and they will patrol important areas, streets and highways,” he said.

While a small number of soldiers had begun taking up positions earlier this week, military spokesman Muhammad Reza-ul Karim said the mass deployment would begin Thursday and continue until Jan. 9. “The troops have been deployed at the request of the Election Commission … in an effort to ensure free, fair and peaceful elections,” Karim said in a statement.

The soldiers would initially be deployed to the main towns and cities in the districts before then moving into more rural areas. He did not say how many troops were being deployed but local media put the number at around 50,000.

The BNP, and its leader Khaleda Zia, has condemned the military deployment, saying it would pit the armed forces against the people. The BNP is at the head of an 18-party opposition alliance that has refused to take part in the polls after Hasina blocked their demands to stand down and let a neutral caretaker government oversee the contest. Two other left-wing parties have also pulled out of the election as has a faction led by former dictator Hussain Muhammad Ershad, who had been an ally of Hasina’s ruling Awami League.

The boycotts have highlighted the growing political polarization in the country of 153 million that won its independence from Pakistan in 1971. While Bangladesh has had a deeply troubled history since independence, with more than a dozen coups, this year has been the bloodiest since it broke free from its former rulers in Islamabad.

Protests over the polls and over the death sentences handed down to Islamists convicted of war crime during the 1971 independence conflict have left at least 268 people dead since January. A constable was burned to death in a petrol bomb attack on a police vehicle Tuesday night while two more people succumbed to their burn injuries Wednesday.

Much of the violence has been blamed on supporters of Jamaat-e-Islami, the country’s largest Islamist party, which has been barred from fielding candidates on Jan. 5.

Three rounds of U.N.-brokered last-minute talks between the government and opposition have failed to resolve the dispute between the Awami League and the BNP whose leaders despise each other. The United States, European Union and the Commonwealth countries have announced they will not send observers to the election, seriously denting its credibility.

Strikes and blockades have crippled the economy, affecting millions of poor farmers and the urban middle class in what is the world’s eighth most populous country and one of the poorest in Asia. The strikes have done further damage to an economy already reeling from the impact on the crucial garment sector from a factory collapse in April, which sparked widespread industrial unrest.