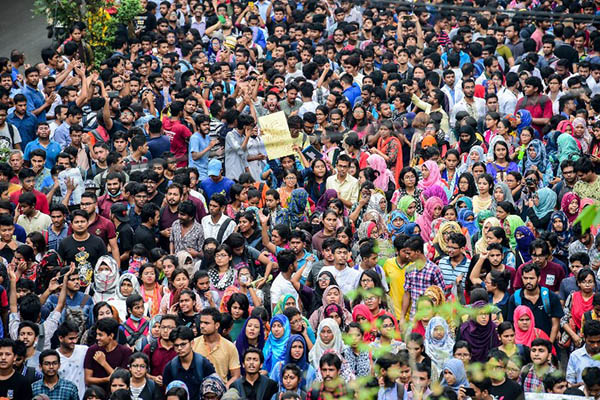 Bangladesh police said on Thursday they have arrested nearly 100 people as they step up a crackdown after student protests that paralyzed the capital.

Dhaka and other cities were brought to a standstill for more than a week by tens of thousands of students demanding better safety measures after two teenagers were killed by a speeding bus.

Police in Dhaka said they have detained 97 people “for violence and incitement in the social media” during the demonstrations that began on July 29.

The moves have sparked fear among activists, protest leader Bin Yamin Mollah told AFP. “Everyone is in a panic,” he said. “Almost all the students who have led the protests have gone into hiding.”

The detentions include acclaimed photographer Shahidul Alam and actress Quazi Nawshaba Ahmed, who were held over comments made on Facebook during the protests.

Writer Pinaki Bhattacharya, a high-profile critic of Prime Minister Sheikh Hasina, has not been seen since intelligence officers asked him to report to their headquarters on Aug. 5, his father told AFP.

Rights groups have criticized the crackdown and the violence used to end the protests. About 1,000 people were injured in police action and attacks by pro-government groups on students and journalists.

On Wednesday, Human Rights Watch said the arrests have created “an atmosphere of fear, putting a serious chill on free speech.”

“Authorities should halt arbitrary arrests, prosecute those involved in violent attacks, and immediately and unconditionally release people it has thrown in jail,” said Brad Adams, Asia director for the rights group.