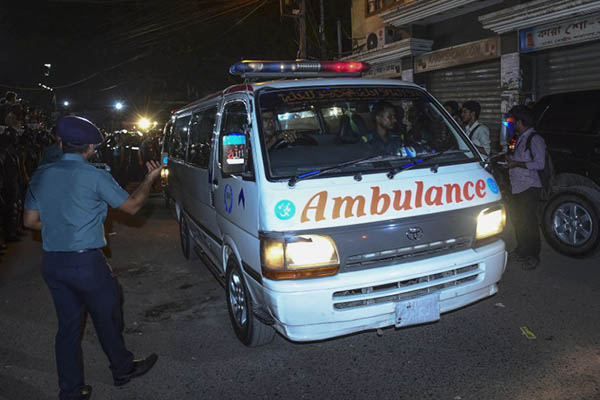 Security ramped up in capital Dhaka to prevent mass rallies protesting the execution.

Bangladesh on Tuesday executed the leader of the country’s largest Islamist party for war crimes, officials said, a move set to exacerbate tensions in the volatile Muslim-majority nation.

Motiur Rahman Nizami, leader of the Jamaat-e-Islami party, was hanged at a prison in the capital Dhaka, just days after the nation’s highest court dismissed his final appeal to overturn the death sentence for atrocities committed during the country’s 1971 war of independence with Pakistan.

Law and Justice minister Anisul Huq told AFP the 73-year-old leader was hanged just before midnight after he refused to seek mercy from the country’s president. “He was executed between 11:50 p.m. and 12:00 a.m. midnight,” Huq said.

The execution has sparked fears it could trigger a fresh wave of violence in the majority Sunni Muslim country, which is reeling after a string of killings of secular and liberal activists and religious minorities by suspected Islamist militants. In 2013 the convictions of Jamaat officials for war crimes triggered the country’s deadliest violence in decades. Around 500 people were killed, mainly in clashes between Islamists and police, and thousands were arrested.

Nizami is the fifth and highest-ranked opposition leader—and the fourth from Jamaat—to have been executed since December 2013 for war crimes despite global criticism of their trials.

“We’ve been waiting for this day,” Home Minister Asaduzzaman Khan told reporters, adding that people “will remember this day forever.”

Hours before the hanging, family members of Nizami met him for the last time at the Dhaka Central Jail, as hundreds of police and elite security forces cordoned off the British colonial-era prison. Security has been stepped up in the capital and in Nizami’s home district of Pabna in the country’s west, with magistrates being deployed to hand down instant prison terms to any law-breakers.

“If anyone tries to commit sabotage, our security forces are ready to identify them and take proper measures,” Khan told reporters.

Since last month an atheist student, two gay rights activists, a liberal professor, a Hindu tailor who allegedly made derogatory comments against Islam’s Prophet and a Sufi Muslim leader have been hacked to death in Bangladesh.

Jamaat called a nationwide strike for Thursday in protest against the execution, saying the charges against Nizami, a former government minister, were false and aimed at eliminating the leadership of the party. “Nizami has been deprived of justice. He’s a victim of political vengeance,” the party’s acting leader Maqbul Ahmad said in a statement posted on Jamaat’s website.

But the execution was cheered by secular protesters, hundreds of whom gathered outside the jail and at a square in central Dhaka to celebrate what they called “a historic moment.”

Nizami took over as party leader in 2000 and played a key role in the victory of an Islamist-allied government in the 2001 general election. He was made a key minister in the Islamist-allied cabinet of 2001-6.

The 1971 conflict, one of the bloodiest in world history, led to the creation of an independent Bangladesh from what was then East Pakistan.

Prosecutors said Nizami was responsible for setting up the pro-Pakistani Al-Badr militia, which killed top writers, doctors and journalists in the most gruesome chapter of the war. Their bodies were found blindfolded with their hands tied and dumped in a marsh at the outskirts of the capital.

The trial heard Nizami ordered the killings, designed to “intellectually cripple” the fledgling nation. He was convicted in October 2014 by the International Crimes Tribunal, which was established in 2010 by Prime Minister Sheikh Hasina’s government and has sentenced more than a dozen opposition leaders for war crimes.

Rights groups say the trials fell short of global standards and lack international oversight, while the government says they are needed to heal the wounds of the conflict.

Amnesty International had called for an immediate halt to Nizami’s execution, citing concerns over the fairness of the trials. The government says up to three million people died in the 1971 war, while independent researchers put the figure at between 300,000 and 500,000.