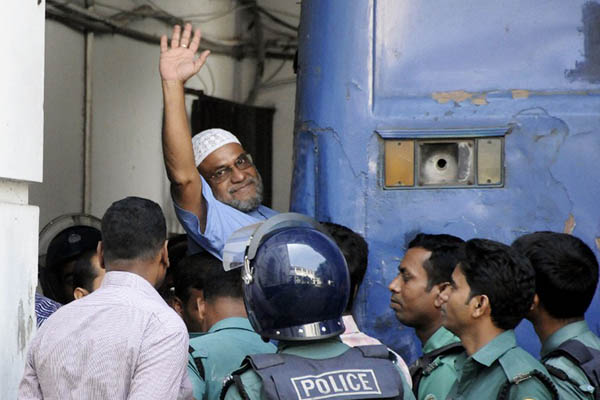 Bangladesh hanged a wealthy tycoon and top financial backer of its largest Islamist party late Saturday for war crimes, dealing a massive blow to the group’s ambitions in the Muslim-majority nation.

Mir Quasem Ali, a key leader of the Jamaat-e-Islami party, was executed after being convicted by a controversial war crimes tribunal for offences committed during the 1971 independence conflict with Pakistan. The 63-year-old was hanged at 10:35 p.m. at the Kashimpur high security jail in Gazipur, said law minister Anisul Huq.

Six opposition leaders have now been executed for war crimes after the secular government led by Prime Minister Sheikh Hasina set up a domestic war crimes tribunal in 2010. Ali is the fifth and the last prominent Jamaat leader to have been executed—a massive setback for the Islamists in the world’s third largest Muslim nation, which has been reeling from a wave of deadly extremist attacks claimed by the Islamic State group.

After the Supreme Court rejected his final appeal against the penalty on Tuesday, he declined to seek a presidential pardon, which would require an admission of guilt, paving the way for his execution.

Prosecutors said Ali was a key commander of the notorious pro-Pakistan militia in Chittagong during the war, and later became a shipping, banking and real estate tycoon. They said he spent millions of dollars of his fortune to hire international lobbyists to derail the war crime trials.

Hundreds of people in Dhaka and Chittagong held impromptu street celebrations as news of the execution was broadcast live on television. But more than 1,000 police were deployed in Gazipur and hundreds of paramilitary border guards were outside the prison and in Dhaka, as authorities feared violence by his Islamist supporters, officials said.

Home minister Asaduzzaman Khan warned Islamists against any ‘unruly’ activities. The war crimes trials have divided the country, with supporters of Jamaat and the main opposition Bangladesh Nationalist Party (BNP) branding them a sham aimed at eliminating their leaders.

The executions and convictions of Jamaat officials plunged Bangladesh into one of its worst crises in 2013 when tens of thousands of Islamist activists clashed with police in protests that left some 500 people dead.

Jamaat, which is banned from contesting elections, has called a nationwide strike for Monday to protest the hanging, saying Ali was ‘murdered’ for playing a “key role in the Islamic movement” in Bangladesh. Ali had helped revive Jamaat and made it a potent force in Bangladesh politics by setting up charities, businesses and trusts linked to it after it was allowed to operate in the late 1970s.

Before he was arrested in 2012, Ali headed the Diganta Media Corporation, which owns a pro-Jamaat daily and a television station that was shut down in 2013 for stoking religious tensions. He was convicted in November 2014 of a series of war crimes including the abduction and murder of a young independence fighter.

“All along he said he was innocent. He said he is being killed unjustifiably,” said Tahera Tasnim, one of Ali’s daughters. She was among 23 family members who met him for the last time in the prison just hours before he went to the gallows.

“He said this repressive government is killing them [Islamist leaders] to stop Islam being established in the society and the country.”

Hasina’s government has defended the trials, saying they are needed to heal the wounds of the conflict, which it says left three million people dead. A group of United Nations human rights experts last week urged Dhaka to annul Ali’s death sentence. “The execution of Mir Quasem Ali, following a trial whose fairness was questioned by the U.N., will not deliver justice to the people of Bangladesh,” said Champa Patel, Amnesty International’s South Asia Director.