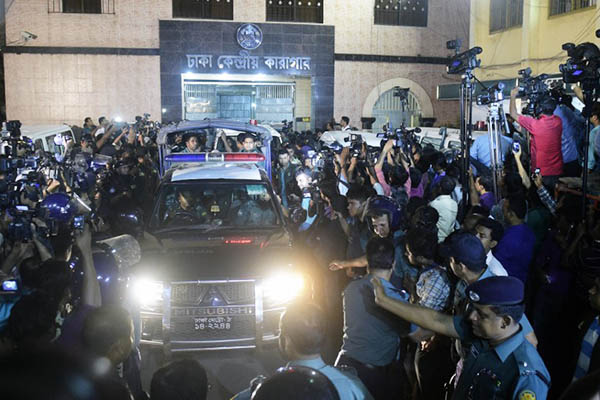 Top Islamist leader had been sentenced to death by a controversial war crimes tribunal in 2013.

Bangladesh authorities on Saturday hanged a top Islamist leader for overseeing a massacre during the nation’s 1971 independence war against Pakistan, officials said.

Four specially trained convicts took him to a makeshift gallows, set up near his prison cell, and hanged him using a rope, in line with Bangladeshi jail procedure. He was declared dead by a magistrate and a government doctor.

Kamaruzzaman was convicted of abduction, torture and mass murder as one of the leaders of a pro-Pakistan militia that killed thousands of people during Bangladesh’s bloody independence struggle.  Hundreds of secular supporters burst into cheers and made victory signs as news of the hanging was announced at Shabagh square in central Dhaka where they gathered to celebrate the death of a man they called a “war butcher.”

Kamaruzzaman is the second Islamist to be hanged for atrocities during the 1971 war of independence against Pakistan. Abdul Quader Molla, the fourth-highest ranked leader of the party, was hanged in December 2013.

Bangladesh went ahead with the latest hanging despite last-minute pleas from the United Nations, the European Union and human rights organizations to halt the execution. The U.N. said the trial did not meet “fair international” standards.

Just hours before the execution, members of Kamaruzzaman’s family visited him at the prison surrounded by tight security. “We found him in good health and not worried about his fate at all,” his eldest son Hasan Iqbal told AFP after seeing his father. “In his last comments, he regretted that he did not see the victory of Islamic movement in Bangladesh. But he was confident that it would be victorious here one day,” he said.

The family has dug a grave at his village in northern Sherpur district where he would be buried on Sunday, he added.

The country’s Supreme Court cleared the last hurdle for execution of Kamaruzzaman on Monday after rejecting his final appeal against the original death sentence handed down to him by a controversial war crimes court in May 2013. He was given several days to seek mercy to the country’s president Abdul Hamid to avoid death. But his son said his father did not seek any mercy.

“My father said only Allah can give or take life, not a president,” he said.