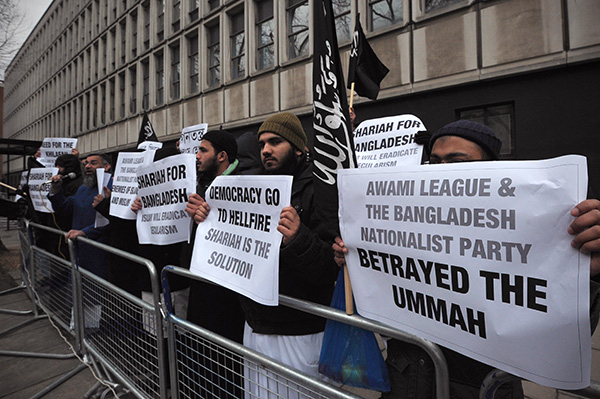 War crimes tribunal has also charged a U.S. citizen for his alleged role in the murders of top intellectuals during the 1971 war.

Bangladesh’s war crimes court on Thursday indicted a Bangladesh-born British Muslim leader for his alleged role in the murder of top intellectuals during the country’s 1971 liberation war.

Chowdhury Mueen-Uddin has held positions in a host of top Islamic organizations in his adopted homeland and was involved in the setting up of the Muslim Council of Britain. The London-based former journalist, who denies any wrongdoing, was a newspaper reporter in the impoverished South Asian country when what was then East Pakistan broke away from West Pakistan.

He is accused of being a leading member of the notorious Al-Badr militia and of the fundamentalist Jamaat-e-Islami political party, which fought for the country to remain part of Pakistan.

“The court has taken into cognizance the charges of war crimes against Chowdhury Mueen-Uddin and issued a warrant to arrest him,” International Crimes Tribunal registrar, Nasiruddin Mahmud, said. Mueen-Uddin would face the death penalty if extradited and convicted. State prosecutor Syed Haider Ali said Mueen-Uddin “has been indicted for crimes against humanity and genocide. The charges include the killing of the country’s top intellectuals during the 1971 war of liberation.” The head of the tribunal’s investigation agency, Abdul Hannan, said Mueen-Uddin had fled the country after the war.

Mueen-Uddin’s lawyer said he “rejects all these allegations in their entirety” and raised doubts about whether Britain would ever agree to extradition, given concerns about the death penalty and the impartiality of the court. “Bangladesh will be required to establish that there is a prima facie case against Mr. Mueen-Uddin,” said lawyer Toby Cadman in a statement. “They will also be required to give an undertaking that Mr. Mueen-Uddin will not receive the death penalty.”

The court also indicted Ashrafuzzaman Khan, a United States citizen, on the same charges as Mueen-Uddin on Thursday. The controversial tribunal has already charged 12 people with war crimes and sentenced to death two people, including the vice president of the Jamaat-e-Islami.

Bangladesh has struggled to come to terms with its violent birth. The current government says up to three million people were killed in the war, many murdered by locals who collaborated with Pakistani forces. Prime Minister Sheikh Hasina Wajed’s government established the tribunal in March 2010 to try the collaborators, but it has been hit by a series of controversies. A presiding judge resigned in December last year after his leaked Internet calls showed he was under pressure from the government to deliver a quick judgment.

The war crimes trials have plunged the country into one of its most turbulent chapters since independence, as the main opposition Bangladesh Nationalist Party and its main ally Jamaat have protested what they view as politically motivated charges. The opposition has called a series of national strikes protesting the trials, and clashes over the verdicts have left more than 100 people dead since the first judgment on Jan. 21.

If you call a murderer a Muslim leader, you humiliate Muslims.

As a Muslim, I feel ashamed that such a murderer is considered as a Muslim leader. Islam is a religion of peace, and it should be represented by peace-loving leaders, not by cold blooded war criminals.