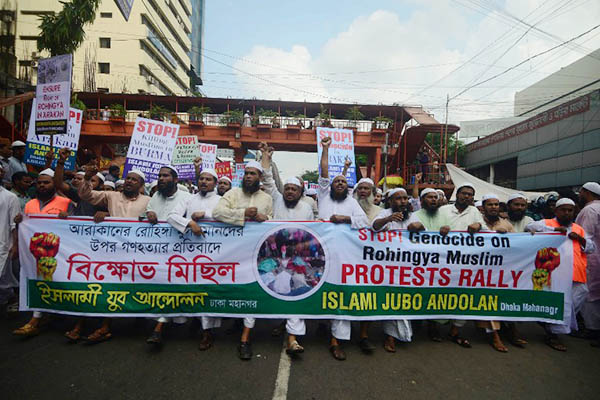 Thousands of supporters of Islamist groups staged protests after weekly prayers on Friday, urging the government to go to war against Myanmar over the “genocide” of Rohingya Muslims.

Police said at least 15,000 followers of five Islamist groups, including the hardline Hefazat-e-Islam, joined a demonstration in front of the country’s largest mosque in central Dhaka. They were protesting against the clampdown by Myanmar’s security forces in Rakhine state and decried international efforts to protect the Muslim minority group, police told AFP.

Nur Hossain Kasemi, a madrassa teacher who heads Hefazat’s Dhaka unit, spoke at the rally, which followed a procession in front of the mosque. “The Burmese government is carrying out a genocide. The houses in Rakhine are being torched. We urge the Bangladeshi people to stand by Rohingya people,” Kasemi told the gathering. “We urge the Bangladesh government to resolve the problem through war. It is the right time,” he said, according to leading online Bengali news portal Bangla Tribune.

“If no diplomatic solution is found, we have asked the government to use military power in an effort to ensure Rohingya can live in Arakan [Bengali for Rakhine],” Hefazat spokesman Fazlul Karim Kasemi later told AFP.

Similar protests by Islamists have been held in other cities across the Muslim majority country.

The U.N. says 391,000 Rohingya have arrived in Bangladesh in the last two and half weeks after fleeing Myanmar. Rohingya Muslims who fled said their villages have been burned to the ground and relatives killed by the army.

Images purportedly showing atrocities against the Rohingya have flooded Bangladeshi social media, triggering an outpouring of sympathy. The Bangladesh government has twice summoned the Myanmar envoy to express concern over the escalation of violence since Aug. 25. It says the arrivals represent an “unbearable additional burden” on the poor country, already home to 300,000 Rohingya before the latest influx.