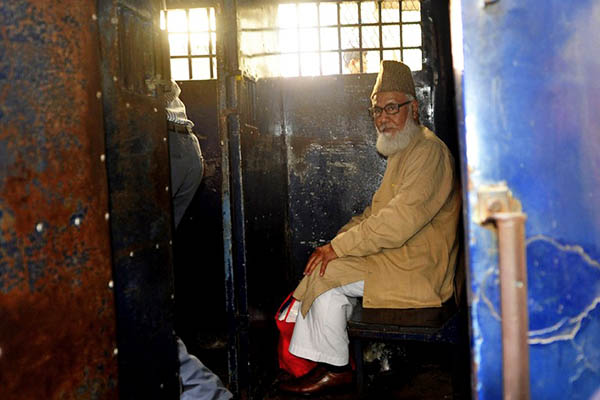 Motiur Rahman Nizami was found guilty of murder, rape and looting during 1971 war.

A Bangladeshi court on Wednesday handed the leader of the country’s largest Islamist party the death sentence for war crimes, in a long-awaited verdict that has triggered fears of fresh violence.

The war crimes court found Motiur Rahman Nizami, 71, guilty of murder, rape and looting during Bangladesh’s war of independence against Pakistan in 1971 when he was head of a ruthless militia. The court sentenced Nizami, head of the Jamaat-e-Islami party, to “hang by the neck until his death” for orchestrating the killing of top professors, writers and doctors during the conflict.

“It’s a historic verdict,” prosecutor Haider Ali told reporters outside the packed court in Dhaka. The court ruled that Nizami was head of the notorious Al-Badr militia, “which took part in many heinous crimes,” Ali said. “The court observed that he is an Islamic scholar but he misinterpreted the Quran.”

Security was tightened across Bangladesh ahead of the verdict after similar judgments against several of Nizami’s senior lieutenants plunged the country into one of its worst crises last year. Extra police and border guards have been deployed in the capital and in other major cities, security officials said.

Tens of thousands of Islamists fought with police and more than 500 people died in the unrest and subsequent political violence ahead of disputed polls in January. While it was effectively banned from taking part in this year’s legislative elections, Jamaat has millions of activists who have staged shows of strength on the streets of Dhaka and other cities in the aftermath of the previous verdicts.

Wednesday’s verdict, originally scheduled for June, was postponed at the 11th hour because Nizami was suffering from high blood pressure.