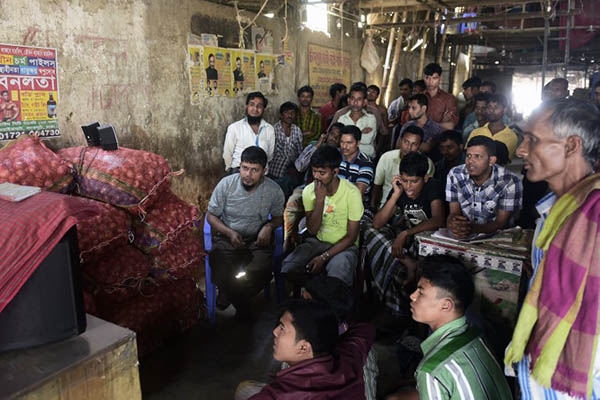 Bangladeshis watch the live broadcast of the match between England and their national team. Munir uz Zaman—AFP

Dhaka’s national team is now among the final eight to reach quarter-finals of cricket tournament.

Bangladesh knocked England out of the World Cup with a sensational 15-run Pool A victory at the Adelaide Oval on Monday to make the quarter-finals.

Rubel Hossain (four for 53) was Bangladesh’s star at the finish, clean bowling Stuart Broad and last man James Anderson to seal victory for the Tigers as England finished on 260 all out chasing a target of 276. Opener Ian Bell made 63 before Jos Buttler’s 65 threatened to see England to victory.

Earlier, Bangladesh—who had been eight for two—made 275 for seven after being sent into bat, with Mohammad Mamudullah (103) compiling the country’s first individual World Cup century and Mushfiqur Rahim making 89.

England skipper Eoin Morgan, who was out for his fifth nought in his last 11 innings, admitted his side had fell below standards.

“It was pretty poor, to be knocked out of the World Cup is unbelievably disappointing,” said Morgan. “I’m gutted, we’ve struggled and fallen away since we arrived here. We wanted to get to the quarter-finals and from there fight through three games.”

Defeat meant England—whose only win at the tournament so far has been against non-Test Scotland—couldn’t claim a quarter-final place but Bangladesh’s victory saw them into the last eight along with Sri Lanka. New Zealand and Australia complete the qualifying picture from Pool A for the quarter-finals.

“We are really impressed by the attitude of our boys. All the boys chipped in,” said Mamudullah, the man-of-the match. “I tried to bat properly. Mushfiqur at the end was the aggressor and it was a good partnership. We thought we might have been 15-20 runs short, but we knew if we could get early wickets we were in. It’s really special for us.”