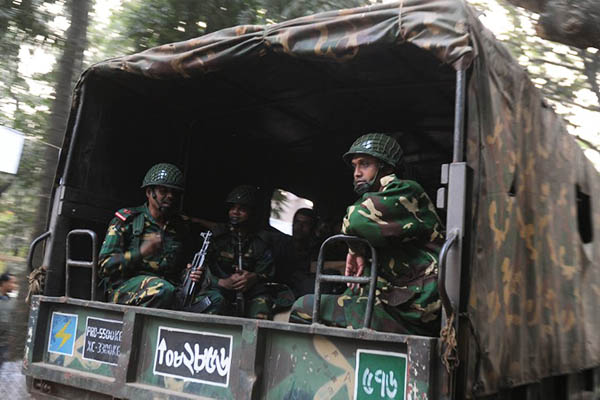 Bangladesh’s military has denied speculation it plans to intervene to end deepening political unrest, warning the media against reporting on any “imaginary” army role in the crisis.

It said it was forced to speak out against “speculative and imaginary” media reports about the military stepping in, because they “could create confusion among the people.”

Bangladesh has been paralyzed since early January by the opposition-led nationwide transport blockade aimed at toppling Prime Minister Sheikh Hasina. Spiraling violence has left at least 80 people dead, hundreds of others injured and cost the impoverished economy nearly $10 billion, according to business leaders.

While mainstream media have kept comments on possible military intervention to a minimum, speculation has been rife on social media and on Internet news portals. In 2007, the military stepped in after months of political unrest raised fears about the credibility of upcoming elections. It installed a military-backed caretaker government, which ruled the country for two years before holding free and fair polls.

Opposition leader Khaleda Zia called for the current blockade of roads, railways and waterways after police confined the former two-time premier to her office on Jan. 3. Zia denies her Bangladesh Nationalist Party is behind the violence, but has vowed to continue the blockade until Hasina agrees to new polls.

Zia leads a 20-party opposition alliance, which boycotted a general election last year on the grounds it would be rigged.

Authorities have deployed thousands of troops and police to guard vehicles and more than 10,000 protesters have been arrested, but the unrest shows no sign of abating. Late on Sunday, suspected anti-government protesters firebombed a passenger train traveling from the Indian city of Kolkata, but no one was injured.

“They threw three petrol bombs targeting the train … but all of them hit the engines,” said Bangladesh Railway spokesman Zahurul Islam. More than 1,000 buses, trucks and vans have been firebombed in attacks blamed on opposition activists as part of the blockade. On Sunday, national police chief Shahidul Haq urged bus operators to stay off the roads after 9 p.m.