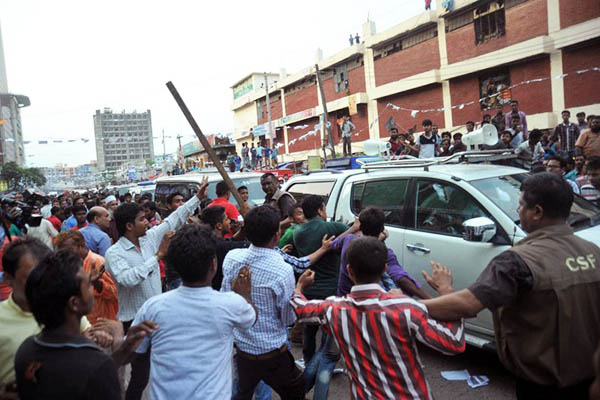 Bangladesh’s opposition accused pro-government supporters on Tuesday of trying to kill their leader Khaleda Zia after her car was shot at and stoned by a mob while campaigning in Dhaka’s mayoral election.

Although Zia emerged unscathed from Monday evening’s attack, which took place as she stopped to tour a shopping district, supporters voiced alarm at the lack of protection from the official security forces.

Prime Minister Sheikh Hasina accused her archrival of making an unnecessary “drama” out of the incident, which has fuelled tensions in the volatile capital before polling on April 28.

Zia, a two-time former premier who leads the Bangladesh Nationalist Party, is hoping that a strong showing in next week’s polls will add momentum to her long-running campaign to force new national elections. After recently ending a lengthy stint holed up in her headquarters, Zia has been campaigning hard in the election—the first her party has taken part in since it boycotted national parliamentary polls in January 2014.

Television footage showed how scores of people attacked Zia’s convoy in the Karwan Bazaar district, smashing the windows of a number of vehicles with rocks, metal rods and staves.

Fazle Elahi Akbar, a retired general who heads the BNP chief’s private security team, said shots were fired at Zia’s bulletproof car while she was inside, but stopped short of calling it an assassination attempt. Several of her own security personnel were injured in the violence, although none seriously.

“Her car was hit by a bullet fired from a pistol from a reasonably close range,” Akbar told AFP, saying there were bullet marks on the vehicle. “If it penetrated it would obviously hit her. She survived because she was in a bulletproof car.”

The BNP filed a complaint on Tuesday at a Dhaka police station, accusing the ruling Awami League party and its student and youth wings of having “planned an attack to kill Khaleda Zia,” said her spokesman Shimul Biswas.

Representatives of around 25 foreign missions had visited Zia’s office on Tuesday to see the bullet damage to her car, said Biswas.

Police confirmed they were investigating reports of a shooting and acknowledged Zia had not been accorded close protection, but said she had not requested any. “If she wants security, we’ll ensure security for her,” junior home minister Asaduzzaman Khan told reporters, while not commenting on the shooting.

The BNP has previously accused the security forces of being behind attacks on its members, including an apparent assassination attempt against Zia’s adviser Riaz Rahman who was shot in his car in January.

Moudud Ahmed, another of Zia’s top lieutenants in the BNP, said Monday’s attack was “planned and aimed to kill her.”

“This is a reflection of the government’s fascist and undemocratic mentality,” Ahmed said in a statement.

Hasina’s camp responded derisively to the accusations. “Khaleda Zia is staging drama… She should stop such activities for the sake of a free, fair and transparent election,” the prime minister was quoted as saying by The Daily Star.

Bangladesh has been plagued by political unrest for the last two years, fuelled in part by Hasina’s controversial walkover re-election. Death sentences handed down to leaders of an Islamist party allied to the BNP over their role in the former East Pakistan’s 1971 independence war also fuelled the unrest.

Scores of people have been killed in firebomb attacks on vehicles since the start of the year when Zia called a transport blockade as part of her efforts to force the government to hold fresh elections.

Bangladesh has a long history of deadly political violence, much of it centerd around the families of Zia and Hasina who are known as the “Battling Begums.”