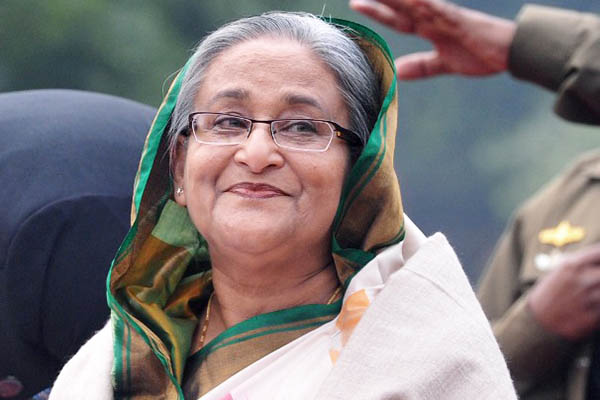 Bangladesh Prime Minister Sheikh Hasina on Monday rejected calls for a new vote after being declared landslide winner in an election marred by deadly violence that the opposition slammed as “farcical” and rigged.

Having secured a record fourth term, Hasina swept aside opposition protests over clashes between rival supporters that left at least 17 dead and allegations of ballot box stuffing and intimidation. “The election was totally free and independent. There is no doubt about it,” the 71-year-old Hasina said. “I have nothing to hide. Whatever I do I do it for the country. My conscience is clear,” she added in comments to reporters.

The ruling Awami League party and its allies won 288 seats in the 300-seat parliament, with the main opposition securing only six seats. Hasina insisted she had no desire “to remain in power” and that voters had backed her party because of Bangladesh’s economic growth during her decade-long rule.

The opposition alliance, led by the Bangladesh National Party (BNP), said it had been the target of a crackdown for months leading up to Sunday’s poll and called for a rerun. “We are demanding that a fresh election is held under a neutral government as early as possible,” alliance leader Kamal Hossain told reporters.

Election authorities said they had not received a single complaint against the vote and that there was “no scope to hold a fresh one.”

Hasina has been lauded for boosting economic growth in the poor South Asian nation and for welcoming Rohingya refugees fleeing a military crackdown in neighboring Myanmar. But critics accuse her of authoritarianism. Her arch-rival and BNP leader Khaleda Zia was jailed for 17 years this year on graft charges that her party said were politically motivated.

Deadly violence that blighted the election campaign spilled over into voting day—with 17 people killed—even though authorities deployed 600,000 security forces across the country. The deaths brought the total number of fatalities during the campaign and election day to 21, police confirmed.

The United Nations called for restraint in the wake of the violence. “We encourage the parties to address electoral complaints in a peaceful manner and through legal means,” U.N. spokesman Stephane Dujarric said in a statement. “Violence and attacks on people and property are not acceptable.”

The opposition alliance accused Hasina’s party of stuffing ballot boxes and using other illegal means to fix the result. BNP spokesman Syed Moazzem Hossain Alal said there were “irregularities” in 221 of the 300 seats.

One voter, Atiar Rahman, said he was beaten by ruling party activists in the central district of Narayanganj. “They told me not to bother, ‘We’ll cast your vote on your behalf’,” he told AFP.

The opposition said the unrest was stirred up to deter voters but the election commission reported 80 percent turnout.

Experts say Hasina’s victory will be sullied by accusations that she hamstrung opponents. “This result might affect our democratic system and might also damage state institutions,” said Sakhawat Hussain, a former election commissioner.

The opposition claims some 21,000 of its activists were detained during the campaign, crushing its ability to mobilize support. Thirty-five of its candidates were arrested over what they said were trumped-up charges or disqualified from running by courts, which Hasina’s opponents say are government controlled.

The leadership of Bangladesh has alternated between Hasina and Zia, allies-turned-foes, over the last three decades. Hasina, daughter of Bangladesh’s first president Sheikh Mujibur Rahman, has now secured her third consecutive term in office, and fourth overall. She was gifted victory in the 2014 election when the BNP boycotted it, claiming it was not free and fair.

Rights groups have since accused her administration of stifling freedom of speech by toughening a draconian anti-press law and the enforced disappearance of dissenters. Hasina rejects accusations of authoritarianism but analysts say she feared young voters would support the BNP. Her government was criticized this year for its heavy handling of weeks of major student protests that brought Dhaka to a standstill.