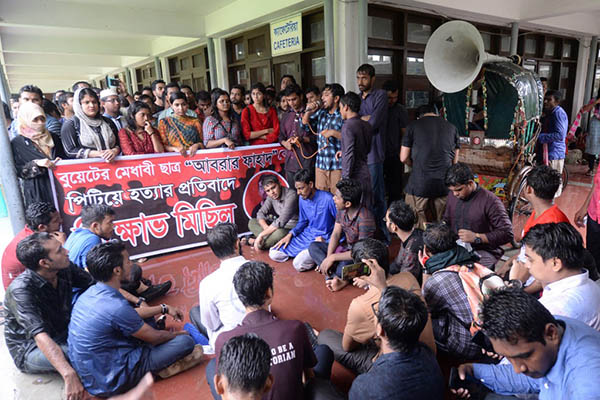 Students in Bangladesh staged protests and blocked major roads Monday after an undergraduate was beaten to death, allegedly by ruling party activists, for criticizing the government over a water-sharing deal with India.

Protests broke out at several universities in Dhaka and the northern city of Rajshahi following the killing of Abrar Fahad of the Bangladesh University of Engineering and Technology. Students chanted slogans demanding “justice” and blocked major roads in the two cities. Teachers joined some of the protests.

Dhaka deputy police commissioner Munstasirul Islam told AFP that Fahad was beaten to death and that ruling party activists were in custody for questioning. His body was found in his university dorm and media quoted other residents as saying that members of the student wing of the ruling Awami League had interrogated and beaten him.

Ashikul Islam Bitu, a vice-president of Bangladesh Chhatra League (BCL), told NTV that Fahad had been questioned over alleged links to an Islamist party’s youth group. After examining CCTV footage, police detained nine men from the same dorm, at least five of whom were BCL activists, local police chief Sohrab Hossain said. He added that the victim’s father has filed a murder case.

Fahad put up a post on Facebook that went viral hours before his death. In it, he criticized the government for signing an accord that allowed India to take water from a river that lies on the boundary the two countries share. The BCL has earned notoriety in recent years after some of its members were accused of killing, violence and extortion.

Last year its members allegedly used violence to suppress a major anti-government student protest. Those protests were sparked by anger over road safety after a student was killed by a speeding bus.

Last month the BCL president and general secretary were sacked over allegations they tried to extort money from the head of a state-run university.