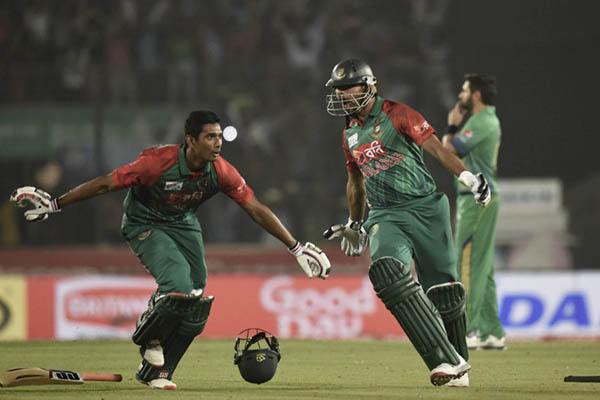 Hosts will take on India in tournament final on March 6.

Bangladesh’s lower-order batsmen kept their cool under pressure to beat Pakistan by five wickets in Dhaka on Wednesday, securing them a place in the Asia Cup final.

Soumya Sarkar was Bangladesh’s highest scorer with 48 runs, helping his team to 131-5 in 19.1 overs after they restricted Pakistan to 129-7 at the Sher-e-Bangla National Stadium. The hosts will play their second Asia Cup final against India on March 6.

Bangladesh’s Mahmudullah Riyad struck medium pacer Anwar Ali for a boundary to complete the thrilling victory and stay unbeaten on 22. The winning boundary triggered wild celebrations in the dressing room and in the boisterous gallery, where Bangladesh’s Prime Minister Sheikh Hasina was among those watching.

Mohammad Amir threatened to spoil the hosts’ party in front of a packed stadium when he bowled Soumya and Shakib Al Hasan in successive overs during his second spell, to finish 2-26. When he bowled Shakib, Bangladesh still needed 26 runs in 16 balls with the tail exposed to Pakistan’s top pace attack.

But Bangladesh skipper Mashrafe Mortaza, not out on 12, moved himself up the order to hit two boundaries in Amir’s next two balls and take off some pressure.

“It’s a big win for us,” Mashrafe said after the match. “This was like a semi-final. I told the boys to just grab it, because we knew there would be plenty of such matches in the future. There was a bit of pressure in the middle, but we coped well.”

The match swung decisively to Bangladesh’s favor when Mashrafe and Mahmudullah scored 15 runs in Mohammad Sami’s next over, which included two no balls.

Pakistan’s captain Shahid Afridi rued his side’s poor batting. “We made too many mistakes. It wasn’t a good total, but the bowlers did superbly,” Afridi said.

Pakistan recovered from a slow start to put on a decent score, thanks to an unbeaten half-century from wicketkeeper-batsman Sarfraz Ahmed. But Bangladesh’s pace bowlers managed to keep Pakistan to 28-4 before Ahmed and Shoaib Malik shared 70 runs for the fifth wicket.

Malik, fresh from a match-winning unbeaten 63 against the U.A.E., hit five fours and a six. Al-Amin Hossain grabbed 3-25 runs, while Arafat Sunny claimed 2-35 playing his first match in the tournament.

Taskin Ahmed conceded just two runs in his first three overs, before finishing with 1-14. Pakistan will face Sri Lanka on March 4, although neither team can now reach the final. The other finalists, India, will face the U.A.E. on Thursday.