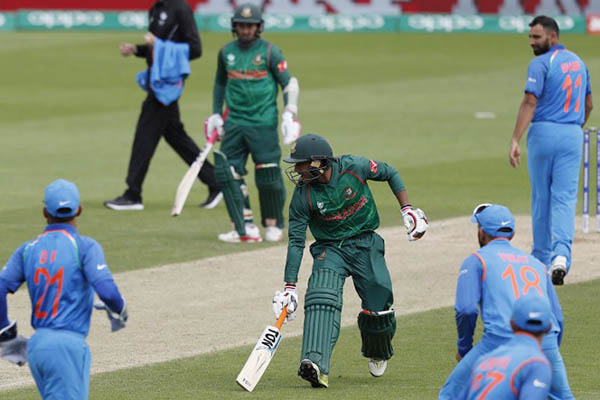 Bangladesh coach Chandika Hathurusinghe insisted his side’s morale remained intact after they suffered a dispiriting warm-up for their Champions Trophy opener against England by crashing to a 240-run defeat against India on Tuesday.

With the start of the Champions Trophy—a tournament featuring the world’s top eight one-day international sides—just two days away, this was a poorly-timed flop from Bangladesh, whose bowlers were swatted away by holders India as they piled up 324 for seven. There were half-centuries from reserve wicketkeeper Dinesh Karthik (94), Hardik Pandya (80 not out) and opener Shikhar Dhawan (60).

Bangladesh then collapsed to 22 for six in just 7.3 overs at the Oval before being bowled out for 84 under cloudy skies in south London. “Obviously it affects the confidence a little bit, but this is a practice game,” Hathurusinghe told reporters. “It’s a big game for us, the first game of the Champions Trophy. But our preparation was good apart from this game so we are confident anyway,” added the former Sri Lanka batsman, with the Tigers having beaten both New Zealand and Ireland in a triangular warm-up event in Dublin earlier this month.

India’s Bhuvneshwar Kumar and Umesh Yadav shared the first six wickets as Bangladesh demonstrated they can be just as vulnerable as England to seam and swing in helpful conditions.

England folded to 20 for six in just five overs at the start of their seven-wicket defeat against South Africa at Lord’s on Monday. Both sides will hope for much improved performances with the bat when they kick off the tournament at the Oval on Thursday. “In cricket anything can happen early on, especially in England,” said Hathurusinghe. “I think the overcast conditions played a part, but hopefully in two days’ time we can get off to a good start and do things differently.”