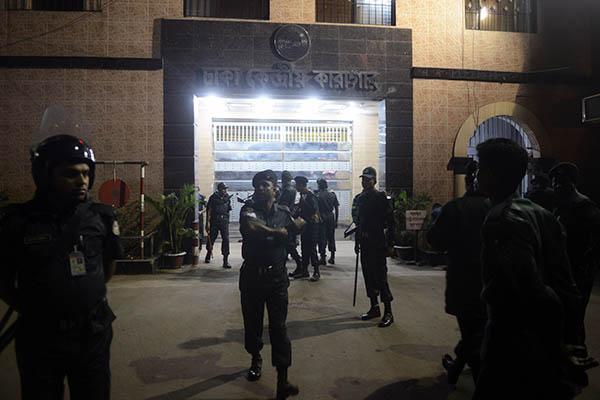 Bangladesh’s highest court held a hearing Wednesday to decide the fate of a leading Islamist leader sentenced to death for war crimes who was saved from the gallows by a dramatic last-gasp intervention.

A judge stayed the hanging of Jamaat-e-Islami party leader Abdul Quader Molla just 90 minutes before his scheduled execution overnight at a jail in the capital Dhaka. He would have been the first person put to death for massacres committed during Bangladesh’s 1971 independence war following a series of verdicts from a special war crimes court that has sparked deadly protests.

Defense lawyers appealed to the Supreme Court arguing that the case deserved a final review as enshrined in the country’s constitution. A hearing began at 10:30 a.m.

In a night of high drama, the government announced late Tuesday that Molla, described as the “Butcher of Mirpur” during the 1971 war against Pakistan, would be executed at one minute past midnight. Molla’s family was called to a jail in Old Dhaka where they found him to be calm and telling relatives one last time that he was being put to death because of his “involvement in the Islamic movement.”

Thousands of secular protesters had gathered outside the jail gate, while thousands of others also massed at the Shahbagh Square in the capital in anticipation of the hanging of one of the country’s most notorious figures.

There was widespread anger as news spread that Molla got a last minute reprieve. “It is a conspiracy,” said Imran H. Sarkar, the leader of a bloggers forum behind the protests. “We won’t leave Shahbagh until he is executed.”

The planned hanging also triggered immediate protests by Islamists in the unrest-plagued country, which is experiencing its worst political violence since independence. Police said a protester was shot dead after Jamaat supporters hurled petrol bombs at officers in southern town of Feni. A woman and her daughter were burnt to death after protesters torched their van outside the capital. The deaths brought to 226 the toll in battles between opposition protesters, police and government supporters since January this year.

Molla was found to be a leader of a pro-Pakistan militia, which fought against the country’s independence and killed Bangladesh’s top intellectuals including professors, doctors, writers and journalists.

Bangladesh’s deputy law minister Quamrul Islam had earlier announced the execution, adding all legal process leading to the hanging has been exhausted and there were no bar to execute Jamaat’s chief strategist.

On Sunday, a tribunal signed an execution order for Molla, and sent it to the main jail in Dhaka, raising speculation that the former journalist could be hanged at any moment.

New York-based activist group Human Rights Watch and two U.N. Special Rapporteurs have warned that by executing Molla without giving him the opportunity to appeal for a review, the country could be breaking international law.