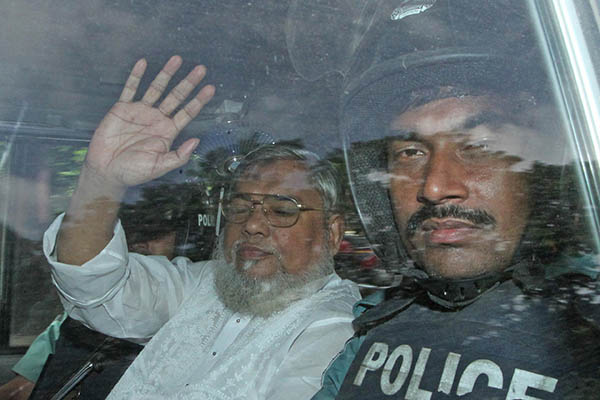 A Bangladesh court on Wednesday sentenced a leading Islamist politician to death for war crimes including murder and abduction, as religious hardliners imposed a nationwide strike over the verdict.

Ali Ahsan Mohammad Mujahid, 65, is the second-highest ranked official of the country’s largest Islamic party, the Jamaat-e-Islami. The much-criticized International Crimes Tribunal found him guilty of five of seven charges. Heading the tribunal, Justice Obaidul Hassan ordered Mujahid be “hanged by the neck” after the verdict was read out to a packed courtroom in the capital Dhaka amid tight security.

The verdict is the second this week by the tribunal, set up by the secular government, which has been hearing cases of alleged atrocities committed during the 1971 war of independence against Pakistan. The spiritual leader of Jamaat-e-Islami, 90-year-old Ghulam Azam, was convicted on Monday and sentenced to 90 years in prison for masterminding atrocities during the war.

Violence erupted over that verdict, with five people killed as police clashed with Jamaat supporters, who imposed a nationwide strike from Monday. The trials have divided the country and sparked deadly protests, with Jamaat supporters branding them a sham aimed at eliminating their leaders. Secularists have demanded the execution of all those accused.

Unlike other such courts, the Bangladesh tribunal is not endorsed by the United Nations and Human Rights Watch has said its procedures fall short of international standards.

On Wednesday, scores of Jamaat activists took to the streets in the western city of Rajshahi to protest against the latest verdict. Police fired rubber bullets at supporters who were burning wood in an attempt to block a highway, local police chief Ziaur Rahman said. Some 25 activists were arrested, Rahman added.

Mujahid, the secretary-general of Jamaat, was a former minister in a previous government and is also an influential leader in the 18-party opposition alliance. Prosecutors have described him as an architect of the killings of intellectuals by militias at the end of the war. The charges include the abduction and disappearance of a top journalist and the murder of a leading music director.

“In three out of five charges he was given the death sentence. Our 42 years of wait for justice are finally over,” the country’s junior attorney-general and prosecutor M. K. Rahman said.

“As the president of Jamaat’s now defunct student wing, he was the chief of the notorious Al Badr militia between October and December in 1971,” prosecutor Muklesur Rahman Badal said.

When it became clear that Pakistan was losing the war, dozens of intellectuals were abducted from their homes and murdered in December 1971 in the most gruesome chapter of the war. Their bodies were found blindfolded and their hands tied behind in a marsh on the outskirts of the capital.

Defense lawyer Tajul islam said they would appeal. “It’s a perverse judgment. There was no iota of evidence against him. The case is politically motivated,” he said. Mujahid is the sixth Islamist to be sentenced by the war crime court since January. Previous sentences plunged the country into widespread violence that has killed more than 150 people.

“Bangladesh Tribunal Sentences Islamist Leader to Death” Your head line is wrong. Because Islam is not support civilian killing, rape etc. in a war. Leader’s of Jamath-e-islam did such kinds of crime. They could help Pakistan army because they support them, but could’t insist to kill , to rape the girls and women.