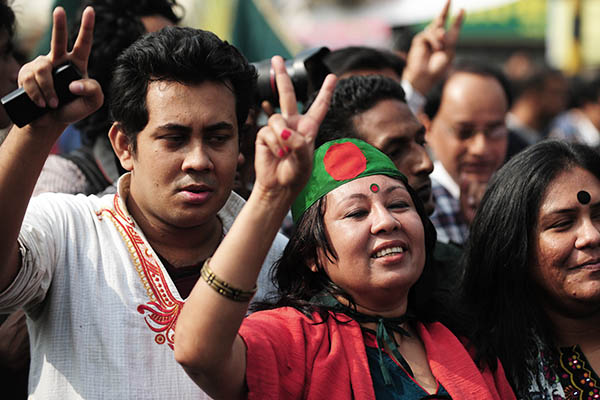 Bangladesh’s highest court upheld the death penalty for a top Islamist leader convicted of war crimes, just two days after he was given a dramatic last-minute reprieve from execution.

The Supreme Court headed by Chief Justice Muzammel Hossain “dismissed” Abdul Quader Molla’s appeal for a final review of his death sentence, meaning he could now be hanged as early as midnight Thursday.

“There is now no legal bar to execute him,” said Attorney General Mahbubey Alam in the court, amid applause by pro-government lawyers.

On Tuesday night a judge stayed the hanging of Molla, just 90 minutes before his scheduled execution at a jail in Dhaka, amid a global outcry over the fairness of his and other trials held for alleged war crimes.

Molla, a leader of the Jamaat-e-Islami party, would have been the first person put to death for massacres committed during Bangladesh’s 1971 independence war following a series of verdicts by a special war crimes court that have sparked deadly protests.

A key opposition leader, the 65-year-old was found to have been a leader of a pro-Pakistan militia, which fought against the country’s independence and killed some of Bangladesh’s top professors, doctors, writers and journalists.

Molla was convicted of rape, murder and mass murder, including the killing of more than 350 unarmed Bengali civilians.

Since Wednesday the Supreme Court has heard an appeal on whether Molla could seek a review of the death sentence, with his lawyers arguing that he had “a constitutional right” to do so. However, Attorney General Alam told the court that there was “no scope for a review in war crimes cases.”