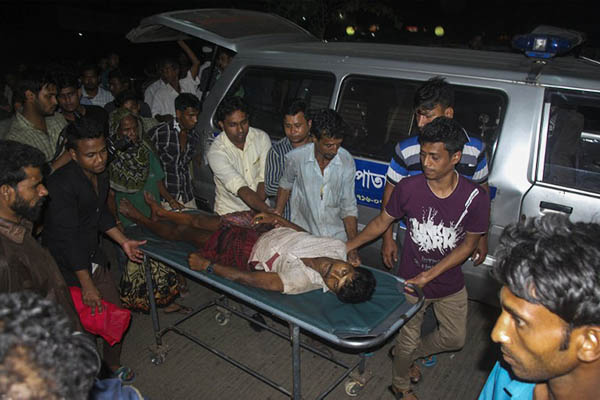 Four people were killed after police opened fire on villagers as a protest against two China-backed power plants turned violent in southeastern Bangladesh on Monday.

Around 500 villagers had gathered in Gandamara, a remote coastal town, to protest against the construction of two coal-fired power plants that they say will evict thousands from the area. Local authorities had banned the demonstration from taking place and the police said they opened fire on the crowd when the protesters attacked them. Four people died, including a pair of brothers, district police chief Hafiz Akter told AFP. Dozens were injured, including 11 policemen, he added. One officer was shot in the head, he said.

Witnesses said at least five people were shot dead and more than 100 were injured by police. They also estimated the crowd at around 15,000 protesters.

“The clashes erupted when police came under attack by local villagers protesting against the move to install the power plant by S. Alam group with finance from China,” said government administrator of Chittagong district M. Mesbahuddin. “At one stage police opened fire to disperse the agitators and to bring the situation under control,” he said.

Dr. Saiful Islam of Chittagong Medical College Hospital said seven people, including four who were shot by live rounds, were brought to his clinic. “Police opened fire as we brought out a procession against the power plants. They even chased the villagers to their homes,” Abu Ahmed, a member of the village committee that staged the protest told AFP by phone. Ahmed said he was shot in the leg.

He said the villagers had been holding peaceful protests for days after S. Alam, the local conglomerate behind the project, started purchasing land for the plants in the village, which lies on the edge of the Bay of Bengal.