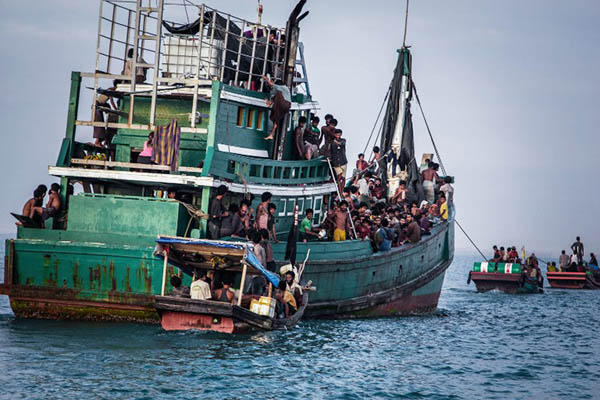 Dhaka’s proposal risks leaving beleaguered minority cut off from all access for four months a year.

The remote Bangladeshi island of Thengar Char disappears completely under several feet of water at high tide, and has no roads or flood defenses. But that hasn’t stopped the government from proposing to relocate thousands of Rohingya refugees living in camps in the southeastern district of Cox’s Bazar, which borders Myanmar to its marshy shores.

Bangladesh said last month it was looking to move the around 32,000 registered refugees, in part because they were hampering tourism in the coastal resort district—home to the world’s longest unbroken beach. The proposal has been met with alarm from leaders of the Rohingya, who began arriving more than two decades ago after fleeing persecution in Myanmar, and whose desperate search for a secure homeland has recently been thrown into the spotlight by a regional smuggling crisis.

The U.N. refugee agency, which has been helping them since 1992, said a move would be “logistically challenging”—an  assessment confirmed by a recent visit to the area by AFP.

Police on the neighboring island of Hatiya prevented the boat AFP was traveling on from going to Thengar Char, saying they could not guarantee its safety. But accounts from local people and a forest department official who oversaw the 2011 planting of mangroves on Thengar Char gave an indication of the challenges.

“At high tide the entire island is under three to four feet of water,” said the official, speaking on condition of anonymity. “It is impossible to live there,” he said, comparing the plan to “compelling a guest to sit on a spiked chair after inviting him to your home.”

Low-lying Thengar Char, around 30 kilometers east of Hatiya island, only emerged from the sea around eight years ago and does not appear on Google Maps. The 10,000-acre island is administered from Hatiya, which has a population of 600,000, but local boat operators told AFP they rarely went there.

Such a journey would in any case be impossible during the monsoon months of June to September, when the seas are perilous—and the island would be completely cut off.

The island, around two hours away from the mainland by speedboat, is in an area frequently hit by cyclones, which have killed thousands in Hatiya and Bangladesh’s southern coast in the past.

Hatiya’s top government official A.H.M. Moyeenuddin said the island had been chosen by a team of government surveyors dispatched to the area on the orders of Bangladeshi Prime Minister Sheikh Hasina. He admitted that relocating thousands to the island would be challenging, but said the construction of cyclone shelters, a barrage and a hospital would be enough to “make the place liveable.”

Hatiya police chief Nurul Huda declared it an “ideal place for Rohingya relocation”—even though it is “isolated and frequented by pirates.”

“All we need is a police station to maintain law and order,” he said.

But residents of Hatiya remain to be convinced by the proposal. “We are already tired of Bengali pirates and river erosion. We don’t want our peace disrupted any further,” said Abdul Halim, who took part in a recent protest by scores of islanders.

Rights groups have expressed concern at the proposed relocation of the refugees living in Cox’s Bazar, which comes as Bangladesh is under scrutiny over its treatment of the Rohingya. The Muslim minority Rohingya are denied citizenship and face a raft of restrictions in Myanmar, including on their movement, family size and jobs, leading thousands to flee every year.

The exodus was largely ignored until a crackdown on the people-smuggling trade in Thailand last month caused chaos as gangmasters abandoned their human cargoes on land and sea.

Thousands are now living in tents on scrubland on the frontier between the two countries, wanted by neither. Most of Myanmar’s 1.3 million Rohingya have no citizenship and are considered by the government to be illegal immigrants from Bangladesh.

Those living in the Bangladesh camps have refugee status and receive support from the United Nations, meaning they have access to food, shelter and other basic necessities. But as Bangladesh and Myanmar face international scrutiny over the fate of the stateless Rohingya, some fear a plot to move them as far from scrutiny as possible.

“There are other islands nearby, habitable for humans,” said the forest department official. “But somehow, this island, which becomes inundated during every single high-tide was proposed as the relocation site.”