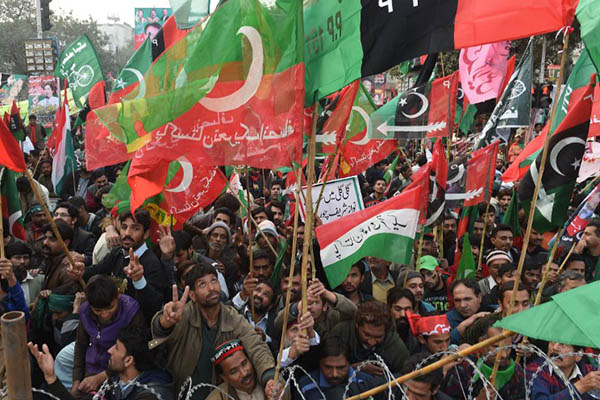 Sargodha’s greatly revered Pir Hameeduddin Sialvi challenged the ruling Pakistan Muslim League (Nawaz) government by invading Lahore in January with his myriad devotees. He wanted the government to repent and fire ministers who had allegedly insulted Islam’s Prophet while drafting a law in Islamabad last year. The great sit-in flopped although the Punjab government let him have his day. After a lot of good money spent, the Sialvis took their horns in and confessed they had been tempted with bribe. Punjab Assembly lawmaker Ghulam Nizamuddin Sialvi stated that “hidden forces wanted to use Pir of Sial Sharif for their ulterior motives against the PMLN government.”

The show of muscle was a Barelvi blunder. And the Sialvis didn’t have the dough like fellow-Barelvi Allama Tahirul Qadri, whose deep purse can take his followers out on a long excursion without much effort. But this time Qadri too failed to mount a big enough all-parties protest in Lahore and was forced to vow never to stage street agitation again to achieve political goals. Clearly, the purse had been hit. It costs Rs. 10 million (crore) to stage a modest demonstration, stage, chairs, seats and food included. There were other reasons too for this humiliation.

Pakistan is dominated by feudal landlords who frequently trace their lineage to local saints. They promote the Barelvi version of Islam that accepts mysticism centered on the shrines of the great sufis. Since the Barelvis were not anti-Shia they couldn’t fight the great Saudi-funded jihad which gave stature and strength to the Deobandi brand of Islam whose street muscle leveraged ultimate wealth. The flopped Barelvi comeback in the year 2018 has proved once again that Barelvi clout without crossborder support is an illusion. Old Pir Sialvi has learned his lesson and has retreated quietly to his shrine. And the strategy to get rid of the PMLN government through street power has met with another reversal.