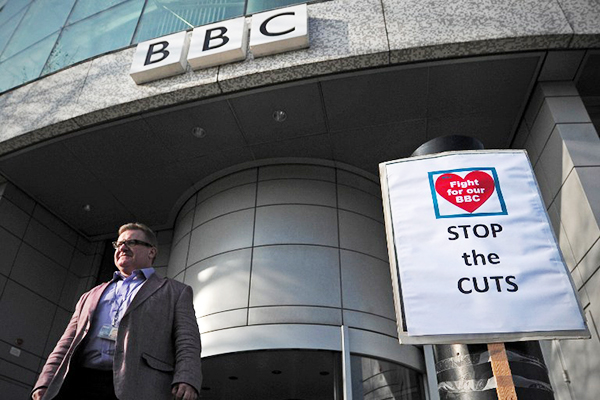 The BBC said Thursday it is cutting more than 1,000 jobs as part of a long-term savings program, made more urgent by a shift to online viewing that threatens its funding.

The public service broadcaster is funded by the license fee, an annual levy imposed on all British households with a television, which raised $5.79 billion in the financial year 2014.

But the number of people paying this fee is declining faster than expected because more and more people are ditching their TVs to watch programs online. Only 50 percent of viewers aged 16 to 24 watch live TV, according to new figures from broadcasting regulator Ofcom.

Instead, they prefer online services such as Netflix and “catch-up” services provided by broadcasters such as the BBC’s iPlayer and Channel 4’s All4, which allow them to watch their favorite programs whenever they want. Such changing habits were cited by the BBC Trust earlier this week in its decision to approve the closure of the youth TV channel BBC Three and move it entirely online.

“As more people use iPlayer, mobiles and online catch-up, the number of households owning televisions is falling,” the BBC said in a statement Thursday. “The license-fee income in 2016/17 is now forecast to be £150 million less than it was expected to be in 2011.” In response, it proposes merging some departments, cutting up to three layers of management in some areas, and “simplifying” support services such as marketing, finance, human resources and IT. “More than 1,000 posts will be lost as a result,” saving £50 million, the broadcaster said in a statement.

A BBC spokeswoman could not say how many of these losses would be redundancies, or in which departments the axe would fall heaviest. Full details are due later this year. “A simpler, leaner, BBC is the right thing to do and it can also help us meet the financial challenges we face,” said BBC director general Tony Hall. “We’ve already significantly cut the costs of running the BBC, but in times of very tough choices we need to focus on what really matters—delivering outstanding programs and content for all our audiences.”

Even without changing viewing habits, the BBC’s funding has been squeezed as part of Prime Minister David Cameron’s drive to reduce public spending. In 2010, the government froze the license fee until 2017, and there are indications it could be reduced as part of a new funding deal to be agreed next year. Culture minister John Whittingdale has said the license fee is a “regressive” tax and last year said it was “unsustainable” in the long term.

The broadcasting workers’ union Bectu, which has in the past staged strikes over the BBC job cuts, said it would examine the detail of the latest announcement. Last month, it launched a campaign entitled “BBC: Love it or Lose It!” which argues against further cuts or freezes to the license fee. As part of the 2010 settlement, the BBC agreed to take over funding of the World Service from the Foreign Office, adding further pressure on its budget.

In 2012, the corporation also sold its iconic Television Centre building, home to television and radio programs since 1960, for £200 million.